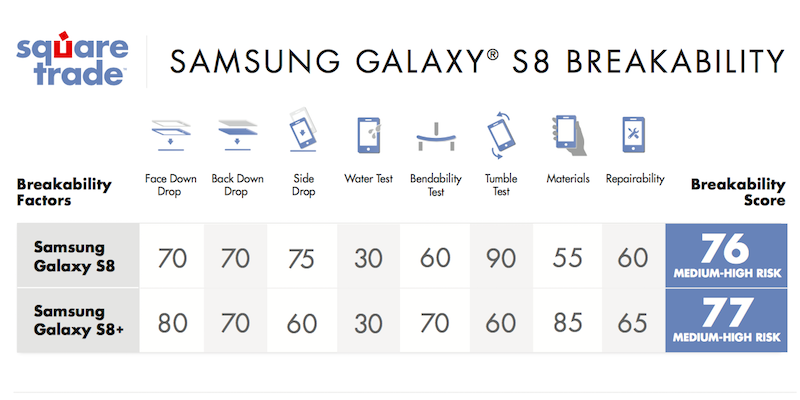 Samsung's latest phones feature big wraparound screens and lots of glass. They also appear to break more easily, according to tests run by SquareTrade, a company that sells gadget-repair plans.

The nearly all-glass design of Samsung's Galaxy S8 and Galaxy S8+ makes them beautiful, SquareTrade said, but also "extremely susceptible to cracking when dropped from any angle." Samsung had no comment.

Despite the tests, a SquareTrade survey found that smartphone owners are twice as likely to buy the Galaxy S8 and Galaxy S8+ as they are an iPhone in the next six months.

SquareTrade said Monday that cracks appeared on screens of both the Galaxy S8 and Galaxy S8+ after just one face-down drop onto a sidewalk from six feet. The phones had similar problems when dropped on the backs and sides, "losing the glass from its lower left corner, making access to software buttons a little dangerous."

Unsurprisingly, both models did well in water-drop tests. The phones had some audio distortion, but that is typical and temporary. The latest flagships have water-resistance features and are IP68 certified.

Meanwhile, SquareTrade also noted that in terms of repairability, the Galaxy S8 and Galaxy S8+ are difficult to open as their front and back panels are strongly attached, but concluded that components inside can be easily replaceable.

SquareTrade didn't test the phones' battery, the source of problems that led to a recall of Samsung's Galaxy Note 7 phone.

"While the nearly all-glass design of the Galaxy S8 makes it a beautiful phone, it's extremely susceptible to cracking when dropped from any angle. However, we have no doubt it's going to be a hit. We found that 89% of Samsung owners reported having a positive view of the brand despite recent controversies, and 36% plan on buying an Galaxy S8 in the next six months," said Jason Siciliano, vice president global creative director at SquareTrade. "Just don't drop it."