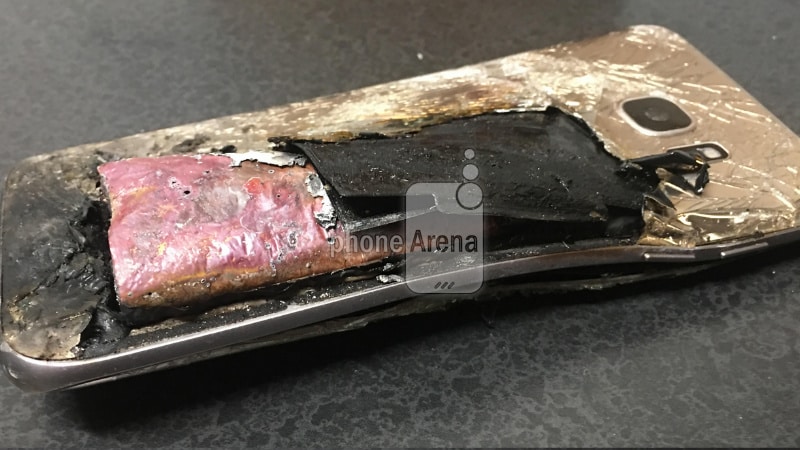 Looks like problems for Samsung just refuse to end. In the midst of the Samsung Galaxy Note 7 controversy, a user has now reported that his Samsung Galaxy S7 exploded while on charge. The user was charging his phone with the original Samsung charger overnight, when his phone caught fire automatically.

PhoneArena reports that the user had replaced his Galaxy Note 7 for the second time, and finally settled for the Galaxy S7 Edge after Samsung announced that it is killing the Note 7 altogether. The pictures shared by the publication show that the Galaxy S7 Edge is completely totalled, and beyond repair. The publication got this information from an anonymous source working at the carrier firm, where this complaint was lodged.

This is not the first time reports of Galaxy S7 explosions have surfaced. A report last month alleged that a Galaxy S7 Edge exploded inside the pocket of Ohio resident Daniel Ramirez giving him second and third degree burns. Ramirez has even filed a lawsuit against Samsung, after he had to undergo a complicated skin graft surgery, and is now under extensive physical therapy.

Samsung, this month, sent pop-up messages to customers reassuring them that their Galaxy S7 units were safe, and that there was no recall for their devices. However, in the light of this incident, it may soon become important for Samsung to change stance and investigate seriously. Of course, no product using lithium ion batteries is immune to isolated incidents - as a recent report pointed to the iPhone 7 catching fire. Apple is said to be investigating the incident.

All of the downfalls haven't prevented Samsung from thinking ahead. The company confirmed its plans to launch the Galaxy S8 and Galaxy Note 8 next year by announcing its new exchange plan. In a fresh statement, Samsung informed its Note 7 customers, that they could trade up for a Galaxy S8 or Galaxy Note 8 smartphone launching next year through an upgrade programme. This refutes the rumour which claimed that Samsung would only launch one flagship every year moving forward.