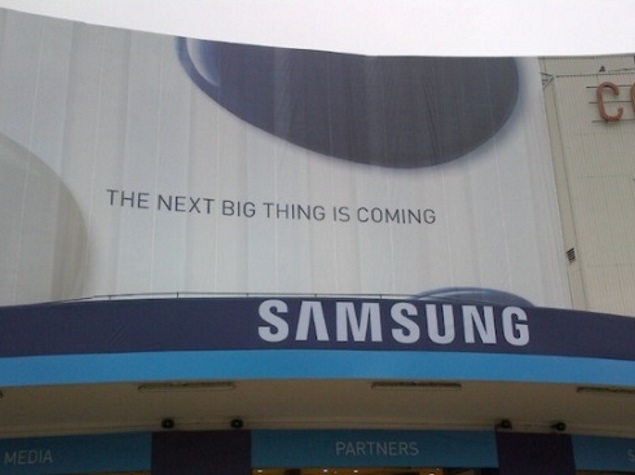 A report has tipped that Samsung is already working on its next flagship smartphone, the Samsung Galaxy S6.

Mydrivers.comreports that the next Samsung Galaxy flagship smartphone can be expected to be introduced at MWC next year, much like the Samsung Galaxy S5 that debuted this year at the same event.

Some of the purported features rumoured for the Samsung Galaxy S6 include a 5.3-inch 4K (2160x3840 pixels) Super Amoled display, which if true will be a huge upgrade from Galaxy S5's 5.1-inch Super AMOLED display with a 1080x1920 pixel full-HD resolution.

The South Korean giant is also rumoured (via Android Headlines) to include iris-scanning feature on the alleged Galaxy S6. As of now, not many details about the feature are out. It's worth pointing out that the iris-scanning feature was even rumoured for the Galaxy S5, though the company obviously never included it. Some of the prominent features of the Galaxy S5 that made headlines were the inclusion of a fingerprint scanner on the home button, a heart rate sensor placed near the 16-megapixel rear camera, and the IP67 certification that makes it dust and water-resistant.

Another major upgrade expected in the Samsung Galaxy S6 is under the hood, as the smartphone is tipped to be powered by a 64-bit Qualcomm Snapdragon 810 processor. Samsung this year showcased the Qualcomm Snapdragon 801-powered version of the Galaxy S5 at MWC, while an octa-core Exynos-based variant was introduced later. The rumoured Samsung Galaxy S6 is said to include 4GB of RAM compared to 2GB found on the Galaxy S5 (Review | Pictures).

Other features expected in the Galaxy S6 include a 20-megapixel rear camera and solid build (non-plastic body).

A recent report suggested that the Samsung Galaxy S5 flagship smartphone will receive the Android 5.0 Lollipop update starting from December this year.

iPad Air 2 Comes With 2GB RAM, the Most for Any iOS Device Yet
iPhone 6, iPhone 6 Plus Pre-Orders Reportedly Top Galaxy Note 4 by Over 3 Times in Samsung's Korea