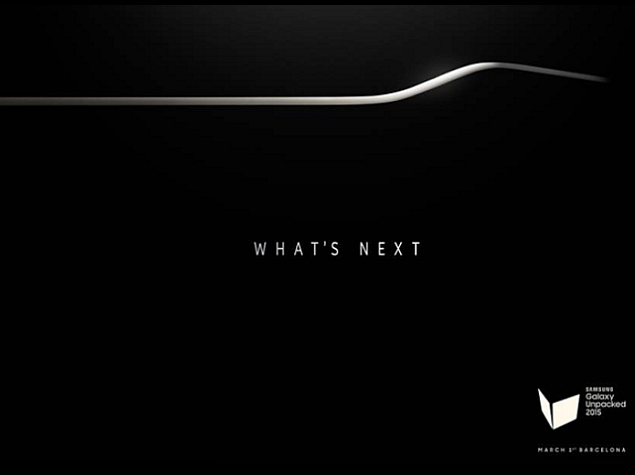 Samsung has sent out invites for a Galaxy Unpacked 2015 event scheduled for March 1. The pre-MWC event is expected to see the launch of the Galaxy S6 - the South Korean giant's flagship smartphone for 2015 - alongside the much-anticipated curved-display variant, the Galaxy S Edge.

The invite certainly hints towards the presence of a curved-display Galaxy smartphone, with the line drawn easily mistaken with the top-right profile of the Galaxy Note Edge and its curved display. Of course, despite numerous rumours and leaks, it is not yet known whether Samsung will put the curved display on the Galaxy S6 itself, rather than offer a variant.

The March 1 launch will also finally clear the mystery of whether Samsung is the "large partner" that decided not to use Qualcomm's Snapdragon 810 SoC to power the Galaxy S6. There have been several reports on the subject, with some indicating Samsung has decided to forgo the chipset due to heating issues.

Qualcomm's hints, and LG's statement that initial samples of the Snapdragon 810 did indeed have heating issues, do lend some credence to reports that Samsung will be using its own Exynos 7420 chipset instead, an octa-core offering based on the 14nm process and coupled with 3GB of RAM.

The Samsung Galaxy S6, as per the most recent reports, is expected to be a metal-clad smartphone that will not be dust or water-resistant. It is said to pack a 5-inch or 5.1-inch QHD Super AMOLED display, a 20-megapixel or 16-megapixel camera with OIS, and built-in wireless charging. The Galaxy S6 is expected to be made available in 32GB, 64GB, and 128GB built-in storage variants, and also be the first smartphone to support the as-yet-unannounced Samsung Pay NFC-based mobile payment service to rival Apple Pay.
Comments