Share on Facebook Tweet Snapchat Share Reddit Email Comment
As we are closing in to Samsung's Galaxy Unpacked 2015 event scheduled for March 1, a lot of limelight has started to drop on the anticipated curved-display variant of Samsung's upcoming Galaxy S6 flagship, likely to be dubbed Galaxy S6 Edge or Galaxy S Edge.

Bloomberg in a report citing people with knowledge of the matter suggests Samsung is set to launch two high-end Galaxy smartphones out of which one will include a "display covering three sides."

The people add that both the handsets will include metal bodies (may be referring to metal frames) and will use next-generation processors. The sources stressed that both the Samsung Galaxy S6 and Galaxy S6 Edge expected at MWC will feature 5.1-inch displays, in-line with recent reports.

Further adding more about the Galaxy S6 Edge, the people noted that the handset will sport a screen on front and both the sides (left and right).

The report claims that the metal frames used on the Galaxy S6 and Galaxy S6 Edge will be supplied by BYD Electronic International company.

In the meanwhile, another report has surfaced on the Internet which talks about the camera details on the upcoming Galaxy S6 and a camera app likely to be pre-installed on both the Galaxy S6 and Galaxy S6 Edge. Sammobile has obtained details from an insider who claims to have received a Samsung Galaxy S6 prototype.

The report says the prototype included a 20-megapixel camera sensor with OIS (optical image stabilisation) and a 5-megapixel front-facing camera. Reportedly, both the cameras will include sensors from Samsung.

The front camera, on the other hand, is said to be the "same as the one found on the Galaxy A series." The report however is unsure whether the Samsung Galaxy S6 will feature a 20-megapixel rear camera. Earlier leaked specifications have tipped a 20-megapixel sensor on the new Samsung flagship. However, we will have to still wait till March 1 to find out.

Sammobile has also received details about camera software on the Galaxy S6 and Galaxy S6 Edge. The report claims that a Pro mode will be available in the default camera app of both the high-end Galaxy smartphones. 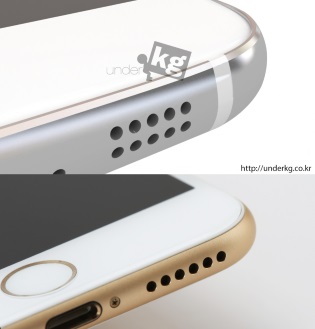 The new Pro mode will reportedly offer options to choose between three focus modes including a manual focus. It speculates that Raw image support might be seen in both the Galaxy S6 and Galaxy S6 Edge. The report also adds that the Gallery app on the handsets will be revamped and "will be more intuitive and easier to use"

Additionally, a Korean site has posted images purportedly showing the Samsung Galaxy S6 and iPhone 6 being compared. The two comparison images however only show certain parts of both the handsets being compared such as the speaker grille of both the Galaxy S6 and iPhone 6, while another shows the bottom panel including charging port, headphone jack, and speaker grille.

Considering that the publication has just posted parts of the Galaxy S6 compared alongside the iPhone 6, we can expect these to be mock-up images created based on recent leaks.

We want to remind readers that nothing is official yet, and that all such leaks must be taken with a pinch of salt.