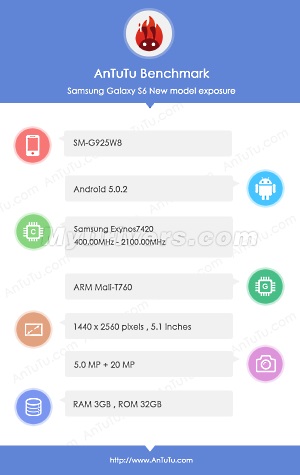 According to the leaked benchmark results posted by MyDrivers (first picked up by PhoneArena), the Galaxy S6 Edge will run Android 5.0.2 Lollipop out-of-the-box. It will feature a 5.1-inch QHD (1440x2560 pixels) display. An Exynos 7420 chipset is seen under the hood clocked at 2.1GHz, coupled with 3GB of RAM and the ARM Mali-T760. The handset is said to sport a 20-megapixel rear camera and a 5-megapixel front camera. There is 32GB inbuilt storage; but no word on expandable storage.

Further, the benchmark test result show an impressive score of 60,978, which is beyond a doubt the highest seen on smartphone so far.

Samsung is expected to launch the Galaxy S6 flagship and Galaxy S6 Edge at the Galaxy Unpacked 2015 event scheduled for March 1.