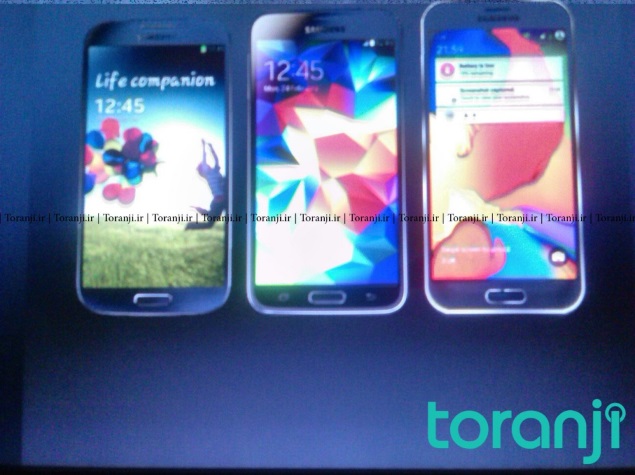 Samsung's Galaxy S6 smartphone, expected to launch early next year, has been leaked on multiple occasions so far, and this time around - the anticipated flagship has been spotted in images and compared with the Samsung Galaxy S4 and Samsung Galaxy S5.

The new leaked images show the yet-to-be-announced Galaxy S6 sporting a metal build and a working display featuring an Android 5.0 Lollipop-styled lock screen. The front of the Galaxy S6 is seen with sleek bezels on the sides and even the frames appear to be made of metal. There is a Samsung logo branding above the display in the front panel while rear also houses one just below the primary camera. The rear panel may also feature a metallic finish, though the leaked images are of low-resolution and appear to have slightly distorted colours.

On Monday, a report claimed that the Galaxy S6 was shipped to India this month for testing purposes and the smartphone featured a 5.5-inch display.

The purported images of the alleged Galaxy S6 have been posted by an Iranian blog Toranji (first picked by Phone Arena).

To refresh, the Samsung Galaxy S6 is rumoured to feature a 64-bit octa-core Exynos 7420 processor alongside Mali-T760 GPU and 3GB of RAM. Earlier this month, a possible variant of Samsung's Galaxy S6 was spotted on the AnTuTu benchmark site tipping some specifications.

Prior to this, a report citing an analyst claimed that Samsung's Galaxy S6 flagship will debut early next year at CES - and not MWC as expected previously.

We have already heard that the Samsung Galaxy S5 successor is codenamed Project Zero, and is reportedly being built from scratch.