Share on Facebook Tweet Snapchat Share Reddit Email Comment
It seems the leaks surrounding the Galaxy S5 will not stop until the phone actually launches. On Wednesday, a new purported leaked screenshot of the interface of the Galaxy S5 surfaced from China, and is currently doing the rounds of the Internet.

The purported leaked screenshot, sourced by the French website NoWhereElse, shows icons in what seems like the settings area of the Galaxy S5, icons that match the unpacked 5 event teaser from Tuesday. Spotted in the leaked screenshot were the Curiosity and Outdoor icons, part of the batch of 9 icons seen in the official teaser image (seen below)

Reports say the text besides the Curiosity icon can be translated to roughly 'discovering nearby devices and accessories' in English, while the text beside the Outside icon has not been translated. We'll have to wait for the unPacked 5 event to see if these icons, along with their accompanying overhauled TouchWiz interface, actually make it to the Galaxy S5 at launch.

The Galaxy S5 is expected to be launched on February 24, at the announced Samsung unPacked 5 event. We have been hearing reports that claim this will be low-key event. 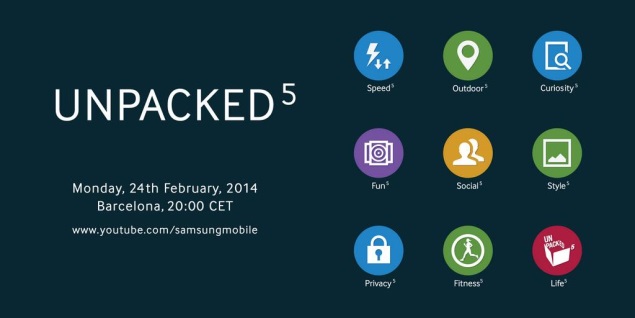 The most recent rumoured specifications, purportedly gleaned from the alleged retail packaging of the S5, include: 5.25-inch QHD (1440x2560pixels) Super AMOLED display, 2.5GHz quad-core processor, 3GB RAM and a 20-megapixel rear camera with a 2-megapixel front shooter. The image also reveals a 3000mAh battery and the Android 4.4 KitKat OS.

Previously rumoured specifications of the Galaxy S5, slightly contradicting the above listed ones, include a 5.24-inch AMOLED screen with a QHD (2560 x 1440 pixels) resolution; two storage variants- 32GB/64GB; two processor variants - Exynos 6 and Snapdragon 805, and a 3200mAh battery. The optics rumoured for the Galaxy S5 include a 16-megapixel rear camera, and a 3.2-megapixel front-facing shooter.