Sprint announced that the new Galaxy S5 Sport will be hitting market shelves starting July 25 and will be available with no down payment, followed by a 24-months payment of $27.09 via Sprint Easy Pay. It will be available in Electric Blue and Cherry Red colour options, drastically different from the staid Camo Green and Titanium Grey offered on the Galaxy S5 Active.

The mobile carrier is also offering a $50 discount on the Samsung Gear Fit wearable for consumers who purchase the Galaxy S5 Sport.

The Samsung Galaxy S5 Sport, much like the Galaxy S5 Active, is dust-proof, shock- and water-resistant with IP67 certification, and can survive being dipped in up to 1 metre water for up to 30 minutes with covers slightly closed. 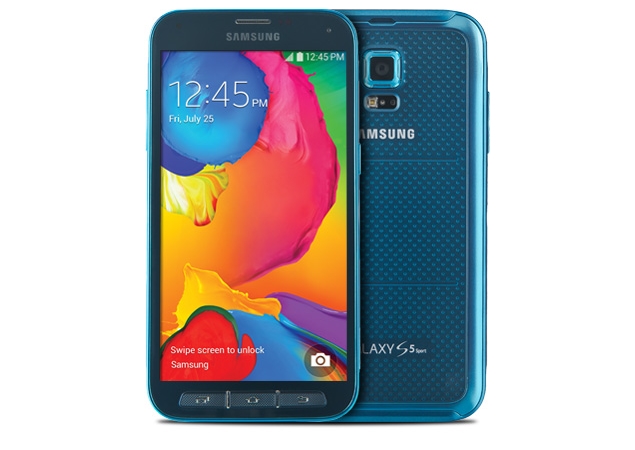 Sprint is touting the new Galaxy S5 Sport as a fitness-themed smartphone. Notably, the Galaxy S5 Sport is the launch device for Sprint's new Fit Live health-focused program and comes preloaded with number of apps such as MapMyFitness MVP - free for 12 months - and offers premium content like customised audio coaching, training plans, live tracking and more, and free Spotify premium for six months for customers.

In terms of specifications, the latest Galaxy S5 Sport is essentially identical to the 2014 flagship smartphone. It runs Android 4.4.2 KitKat out-of-the-box and features a 5.1-inch Super AMOLED display with a 1080x1920 pixel full-HD resolution.

The smartphone comes with 2GB of RAM and will be available in 16GB inbuilt storage model, with microSD card expandability up to 128GB. The Galaxy S5 Sport features a 16-megapixel rear camera with HDR (for video as well), and a 2-megapixel front-facing camera.

"We continually innovate to provide our customers with new products that can improve their lives. Today, Sprint joins leading innovators in Samsung, Under Armour and MapMyFitness to drive technology advances for fitness, health and wellness," said Dan Hesse, Sprint Chief Executive Officer on the launch of the Galaxy S5 Sport.