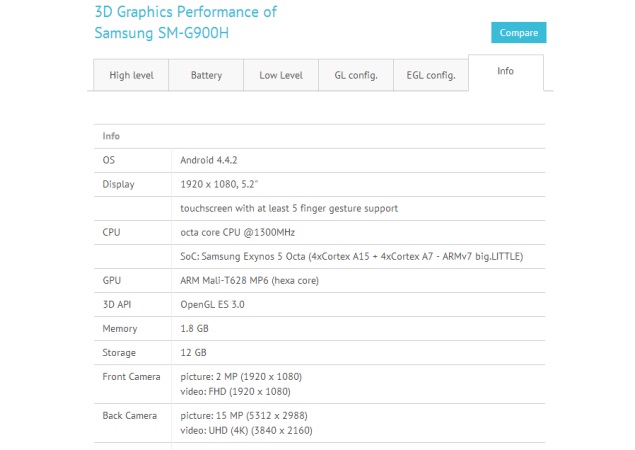 Samsung, within hours of the Galaxy S5's launch, accidentally revealed an octa-core variant of the device via an infographic that showed the evolution of specifications in the Galaxy S family.

Now, thanks to a benchmark listing allegedly of the Exynos-based Samsung Galaxy S5 that was first spotted by GforGames, we get the first glimpse of the octa-core variant of the flagship smartphone's innards.

According to the purported GFXBench 3.0 listing, the Exynos-based Galaxy S5 comes with model number SM-G900H. It will run Android 4.4.2 and will sport a 5.2-inch display full-HD display, much like the Snapdragon chipset-based Galaxy S5 model.

The alleged benchmark listing further shows a Samsung Exynos 5 octa-core processor, detailing four Cortex A15 cores, and four Cortex A7 cores, based on the company's implementation of the ARM big.LITTLE architecture.

We assume that the rumoured Exynos-based Galaxy S5 is powered by the new Exynos 5422 SoC; however, we are yet to hear an official confirmation from the company.

It's worth pointing out that we first heard of the Galaxy S5's SM-G900H variant in February and it was then said to be powered by a 1.5GHz Samsung Exynos 5422 processor.

In February, the Samsung Galaxy S5 was listed at two online retailers in Europe with pricing. The Galaxy S5 has been listed for pre-order on Clove UK at GBP 550 (approximately Rs. 56,900), and for registration for notification on Amazon Spain with a price tag of EUR 729 (Rs. 62,200 approximately).

The Samsung Galaxy S5 is also said to be coming soon in a premium variant that could launch in May.