Samsung might be prepping to launch two new smartphones very soon, as the devices were found listed on an Indian import/ export website.

As seen on Zauba, Samsung smartphones codenamed SM-G750 and SM-G800 have been listed. The SM-G750 sports a 5.1-inch screen, which is similar to what we have seen in Samsung Galaxy S5 flagship. The website is seen listing three variants of the SM-G750: SM-G750A, SM-G750H and SM-G750F. Moreover, the user agent profile (UAP) of the SM-G750A is available on Samsung Mobile's website.

The UAP lists the GM-750A to sport a 2.3GHz ARM11 CPU (number of cores unspecified), 720p HD screen, and Android (https://gadgets.ndtv.com/tags/android) 4.3 Jelly Bean. The other SM-G750 variants are also said to have an HD (720x1280 pixels) resolution. Looking at the specifications, the device seem to be on the lower-end compared to the Galaxy S5, indicating this might be the rumoured, cheaper Galaxy S5 Neo variant. The SM-G750A is thought to refer to the AT&T variant of the handset.

The Samsung smartphone codenamed SM-G800 that was also spotted on Zauba (see below) is thought to be the rumoured Samsung Galaxy S5 Mini, and to sport a 4.5-inch screen with a 720p display. Three variants of the device were spotted on Zauba, the SM-G800F, SM-G800A, and SM-G800H. 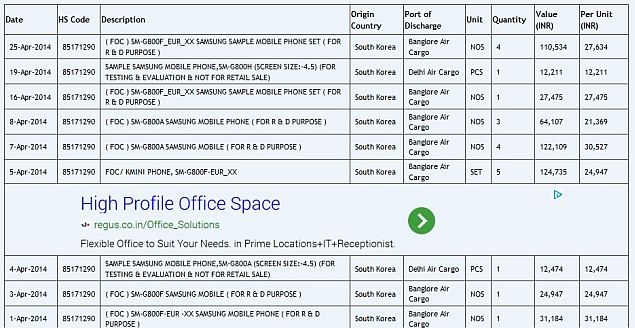 Samsung is also said to be working on the premium version of its Galaxy S5 handset, tipped as the Galaxy S5 Prime. Rumoured specifications claim that the alleged Galaxy S5 Prime will come with the octa-core Exynos 5430; Samsung might aim for a 2.1GHz and 1.5GHz clocking speed on the ARM Cortex-A15 and Cortex-A7 cores respectively, and boast of a small boost in CPU power compared to previous iterations.

Reports also indicate that Samsung would be ditching Qualcomm's Snapdragon chipsets on the KQ premium variant, and would instead use an Intel processor for one of the two variants, while the other is said to sport an Exynos chipset.

Previous reports have tipped that the alleged premium Galaxy S5 would sport a Quad HD display and the rear camera would come with OIS (optical image stabilisation), a feature that is missing in the Samsung Galaxy S5.