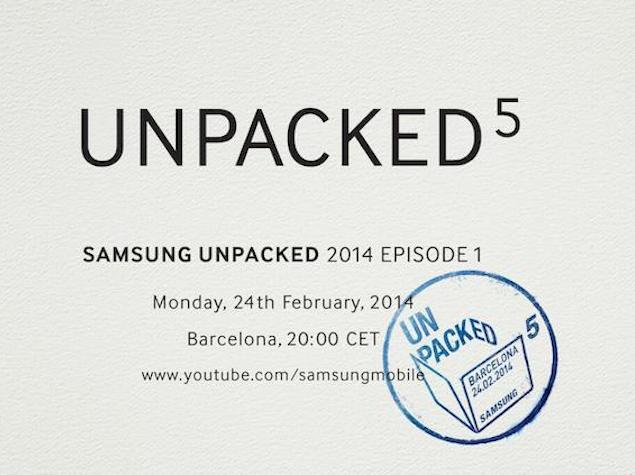 The Samsung unPacked 5 event from MWC 2014 is now over. Thanks for joining us, and catch all the specifications with our launch coverage article.

Ayme says the many devices showcased today, including the Samsung Galaxy S5, will be released in 150 countries on 11 April 2014.

Samsung Sound premium headphones are also being showcased, as headsets for audiophiles. Samsung Galaxy Gifts is also being described, a privilege application.

Designer straps will also be available. Instant notifications are also available, separating it from other fitness bands. Users can also control their smartphone in a limited manner, such as rejecting calls, playing music, and more.

Of course, Park says, if users want something even slimmer and lighter than the Gear 2 and Gear 2 Neo, there is always the Gear Fit - it apparently 'redefines' category, and features the 'world's first' curved Super AMOLED touch display in the world. Straps will once again be swappable, like the Gear 2 Neo.

According to Park, improvements to the Gear 2 and Gear 2 Neo, as compared to the predecessor, include better personalisation, protection, and features.

Park is now talking about the 'extended ecosystem' created with the Gear 2, because of its various own apps. The company is also releasing the Gear 2's SDK to help developers create apps for the smartwatch.

Park is talking about fitness, and is now showcasing the Gear 2 (more details), speaking about how Samsung improved the new-generation of smartwatches, listening to customer feedback about the original.

David Park is back on stage, speaking about the Lifestyle aspect of the Galaxy S5 and the Samsung ecosystem.

The much-anticipated 'Finger Scanner' on the Galaxy S5 is being detailed, with applications such as Mobile Payment. It also unlocks 'Private Mode'.

The Ultra Power Saving Mode on the Galaxy S5 is being described. In times of need, when the smartphone is down to 10 percent of battery life, with the new mode, the smartphone can last up to 24 hours of standby time.

Ayme is now describing the IP67 certification of the Galaxy S5, which makes the smartphone dust and water resistant - The S5 is protected for your lifestyle. He warned however, the S5 is only water resistant, and not waterproof, and should hence not be held underwater.

Ayme is now describing the fast connectivity options of the Galaxy S5, with full LTE coverage, Wi-Fi MIMO (802.11ac), and a Download Booster - which combines Wi-Fi with LTE - as fast as downloading a gigabyte in 30 seconds.

The HDR (Rich tone) feature being described, and Ayme speaks of how the Galaxy S5 allows for HDR usage on video recording as well - supposedly, a smartphone first.

Ayme is describing the Galaxy S5's camera, stressing its importance to customers. HDR (Rich tone), Selective focus, and hybrid autofocus features both contrast AF and phase-detection AF - which according to Samsung translates speeds as low as 0.3 seconds to take a snap.

Speaking about the Galaxy S5's Super AMOLED display, Ayme is talking about the brightness and contrast possible with Local CE at 500cd/m2, and a super dimming function at 2cd/m2. Adaptive display tech is also being touted.

If interested, you can check out the full Samsung Galaxy S5 specifications here.

The Galaxy S5 will also feature optional designer back panels, over and above the four colour variants, previously described.

According to Ayme, customers wanted a modern glam look, a great camera, the fastest network, to stay protected, and stay fit.

Ayme is speaking about how Samsung has listened to customers to make the Galaxy S5.

JK Shin has stepped off stage, and now, Park is inviting Jean-Daniel Ayme of a European telecommunications body, to speak on stage.

Shin has also unveiled the Gear Fit (different from the Gear 2 and Gear 2 Neo), an healthband, which features a curved display. It conveys updates from the linked smartphone.

It features a 'unique perforated' back panel in three colours - Electric Blue, Copper Gold, and Shimmery White, Charcoal Black, unlike any other Samsung devices.

The Galaxy S5's fitness focus is also being showcased, and Shin says all the fitness features will require the Galaxy Gear smartwatch. The device also features the first heart rate sensor on a smartphone. Apart from this, Shin also spoke about the IP67 certification making the phone dust and water resistant, and the Samsung Knox protection and device management solutoin.

Shin is describing the 'fast connectivity' of the S5, featuring the latest LTE, and Wi-Fi MIMO,

The Galaxy S5 has been showcased in a video on stage, and Shin is holding up the device for all to see.

Shin speaks of the difficulties for Samsung to continue to 'honour' its customers in this dynamic, changing world.

Shin in speaking about the tremendous innovation and growth in the mobile space, with Samsung one of the 'key drivers'.

JK Shin has stepped on stage,  co-CEO of Samsung.

Park, after introducing the orchestra, is speaking about how this is an exciting time to be alive. He's speaking of innovative technology that lets users live life to the fullest.

The Samsung unPacked 5 event at MWC 2014 has finally kicked off, with an intro video being shown.

Samsung will be offering the Galaxy S5 in 16GB and 32GB variants, with microSD card expandability up to 64GB. The smartphone weighs in at 145 grams, and has dimensions of 142x72.5x8.1mm. It features a 2800mAh battery, rated to deliver 21 hours of talktime, and 390 hours of standby time.

The Samsung unPacked 5 event at the Mobile World Congress 2014 tradeshow has yet to kick off, however, the company listed the specifications on its site.

We seem to have a slight delay in the Samsung unPacked 5 event kicking off, with the orchestra still playing.

The Samsung unPacked 5 event at MWC 2014, Barcelona is scheduled to start in the next five minutes. Stay tuned for live updates.

The event begins at 8PM Barcelona time, that's 00:30 Tuesday in India, 7PM in London, 2PM in New York, and 11AM on the west coast in the US. Stay tuned for updates.

Welcome to our live blog of the Samsung Galaxy S5 launch at the sidelines of Mobile World Congress in Barcelona.

Samsung Galaxy S5 is to make its debut at the unPacked event on the sidelines of the Mobile World Congress in Barcelona.

Recent leaks have pointed that the Galaxy S5 will not be a major departure from company's Galaxy S family design. Earlier on Monday captured the phone in all its glory and revealed that the Samsung Galaxy S5 indeed comes with a fingerprint scanner that can register up to three different fingerprints at a time. The leaked image further shows the Samsung Galaxy S5 including a physical button on the front panel.

We have already heard a lot about Samsung Galaxy S5's innards. Previously expected specifications of the Galaxy S5 include a 5.24-inch AMOLED screen with a QHD (1440x2560 pixels) resolution; two storage variants - 32GB/64GB; two processor variants - Exynos 6 and Snapdragon 805; and a 3200mAh battery. The optics long-rumoured for the Galaxy S5 include a 16-megapixel rear camera and a 3.2-megapixel front-facing shooter.

Samsung shared an unPacked trailer that all but confirmed that the Galaxy S5 will be a waterproof device. Also, a teaser of the Galaxy S5 on the German website of UK-headquartered mobile carrier, O2 showed a smartphone making a splash in the water.

Reports have suggested that Samsung might unveil its 2014 flagship smartphone in two variants.

Earlier rumours suggested that one of the highlights of the Samsung Galaxy S5 would be a the revamped software UI that represents a complete overhaul of Samsung's TouchWhiz UI, but the leak earlier on Monday indicated otherwise.