Interestingly, both the handsets are listed as 'Not in Stock' with a 'Notify Me' option for consumers to register. As of now, it is not clear whether the price cuts of Rs. 5,750 for the Galaxy S5 and Rs. 4,990 for the Galaxy S5-LTE are part of a limited festive period offer, or are permanent. 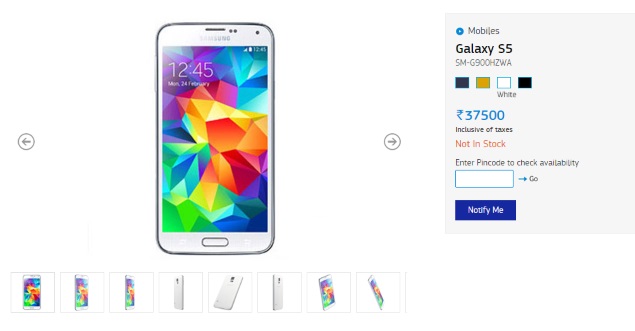 The Galaxy S5 is also available via several third-party online retailers at further discounts and is available at Rs. 36,580 (Flipkart) and Rs. 37,295 (Amazon.in).

(Also see: Samsung Galaxy Note 4 to Be Available in India Same Day as iPhone 6, iPhone 6 Plus)

Samsung earlier this month launched the Galaxy Note 4 in India priced at an MRP of Rs. 61,500, and a market operating price between Rs. 58,300 and Rs. 58,500. Notably, Samsung's new phablet went on sale in India the same day as the iPhone 6 Plus - Apple's first phablet.

Apart from launching the Galaxy Note 4 in India, the company also unveiled the Gear S 3G-enabled smartwatch at Rs. 29,500 (MRP), with an estimated market operating price of Rs. 28,900.