The Samsung Galaxy S4 LTE-variant's Android 4.3 Jelly Bean update was reported to have started rolling out last week, now, new reports claim that the South Korean major is currently pushing out the update to the Galaxy S4 (GT-I9500) variant, including to users in India.

The leak comes courtesy @TaazaTech, a technology fan who posted a screenshot of the notification that purportedly reveals Android 4.3 update for Galaxy S4. The update was first reported by Android OS.

As per the leaked screenshot, the update is about 658MB in size and is reportedly available both OTA (over the air) and via the company's Kies software. Notably, the update brings Galaxy Gear support, Samsung's first wearable tech device, making the S4 the second device to sport that functionality, as previously announced by Samsung. 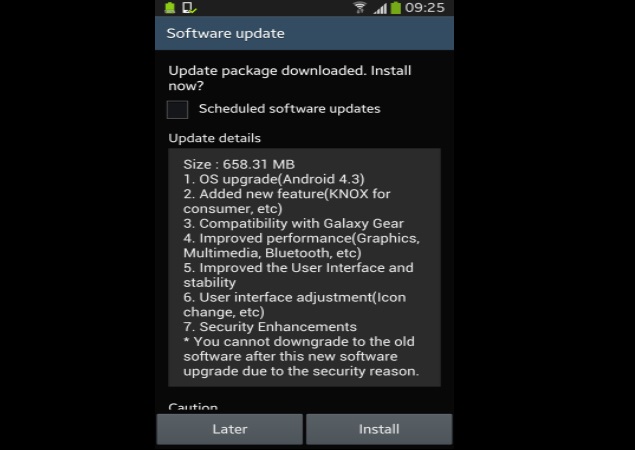 Some of the update details leaked via screenshot include KNOX for consumers; improved RAM management; improved display colour reproduction which will reportedly make display look sharper than before; improved TouchWiz launcher and minor tweaks in the UI for contacts, flashlight widget and dialog box apps.

Not too long ago, a report indicated that Samsung was planning an Android 4.3 update for its top of the line smartphones soon. The report also claimed the devices getting the Android 4.3 update were the 2013 flagship, the Galaxy S4 in October while the 2012 flagship device, the Samsung Galaxy S III was expected to get the new Android update by October end or even November. The report further revealed that the Galaxy Note II would also be getting the taste of the new Jelly Bean iteration, but that would only be by the end of November, or early December.