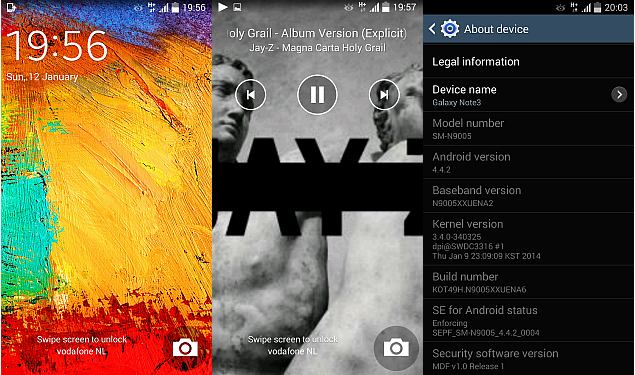 While the Android 4.4 KitKat upgrade for the Google Nexus devices might have already come by December 2013, it was reported then that Samsung would launch the upgrade for their Galaxy S4 and Note 3 devices in the first quarter of 2014. A couple of days ago, however, screenshots of a revamped TouchWiz interface skinned on Android 4.4.2 running on the two devices began making rounds of the Internet. Android 4.4 KitKat test upgrade ROMs for the two phones have also been leaked in the meanwhile, and are available for download.

The alleged leaked Android 4.4.2 KitKat screenshots of the Samsung GT-I9505 Galaxy S4 show a flatter TouchWiz Nature UX design. Phonearena reports that mobile carriers have already confirmed that the S4 will get the upgrade by the end of January.

From what we can see from the screenshots, the interface looks to have been completely overhauled, and it is suspected that they might be doing the same with the Galaxy S5. The first test would obviously come with the S4. The new KitKat-laden units are supposedly faster. The announcement comes in the wake of the new PRO line of tablets that they announced earlier this week. Samsung is also reported to have completely overhauled the interface of its other phones this year.

Along with the Samsung Galaxy S4, the Galaxy Note 3 will reportedly also be receiving the Android 4.4.2 KitKat upgrade soon. Along with the S4, pictures of the Note 3 too leaked out on the Internet with the new OS running on it. SamMobile was the first to report that an Android 4.4.2 test upgrade for the Galaxy Note 3 (SM-N9005) that features the build number KOT49H.N9005XXUENA6 was already available for download.

Apparently the Galaxy Note 3's Android 4.4.2 update features many of the same tweaks that are included with the Galaxy 4, such as white status bar icons and a lock screen camera shortcut. Also said to be packed into the upgrade is full screen album art on the lock screen and "significantly" improved performance that even manages to speed up the process of unlocking the Note 3.

As with the Note 3 firmware leak, the Android 4.4.2 test upgrade update for the Galaxy S4 (build number I9505XXUFNA1) is also available for download for any users that don't feel like waiting for Samsung's official push to begin - though we recommend waiting. SamMobile suggests that that rollout could begin in one to two weeks, but as with most other software updates, owners of carrier-branded Galaxy S4 and Note 3 units will likely be waiting a bit longer while their update goes through the operator approval process.
Comments