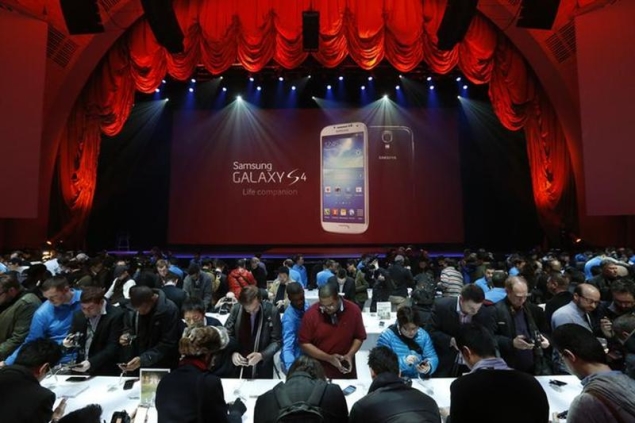 Here's the bit of the article that mentions the existence of the Galaxy S4 mini:

"The Galaxy S 4 doesn't come out until late April. It's fast, has a big, bright screen, and will probably be another huge hit for Samsung, as will the S 4 mini that will go on sale soon after.

A recent news report had suggested that the Samsung Galaxy S4 mini will sport a 4.3-inch qHD Super AMOLED display with a pixel density of 256ppi. The smartphone will allegedly be powered by a 1.6GHz dual-core processor. It is expected to run Android 4.2.2 (Jelly Bean) with Samsung's own TouchWiz Nature UX 2.0 UI layer on top.

Earlier, there have been news reports suggesting that Samsung is working on multiple products under its Project J. The Samsung Galaxy S4 mini is also a part of this project along with the rumoured Samsung Smart Watch.

Another report mentioned that Samsung will be launching the Galaxy S4 mini in both single-SIM and dual-SIM variants.

The move doesn't come as a surprise, going by Samsung's earlier pattern of devices. The South Korean electronics giant had also introduced a mini version of its Galaxy S III in October 2012. The Samsung Galaxy S III mini features a 4-inch screen, runs Android 4.1 Jelly Bean, and is powered by a dual-core 1GHz processor. It features a 5-megapixel camera, a 1500mAh battery and 8/16GB internal storage options.

However, the Samsung Galaxy S III mini has not been launched in India so far and there are reports indicating that it is unlikely to make it to the country.
Comments

Sri Lanka auction paves way for launch of first nationwide 4G mobile network in South Asia
'Who's that guy in the movie?' Google is at hand to offer help