Samsung has launched its much-anticipated smartphone Galaxy S4 in India priced at Rs. 41,500 for the 16GB variant. The phone will compete head-on with the HTC One (Review | Pictures) which is priced at Rs. 42,900 and has received rave reviews, as well as Apple's iPhone 5 for the top spot in the smartphone race.

Samsung Galaxy S4 will be available starting Saturday, April 27, from 12 noon to 4 p.m. from Samsung premium brand stores in Delhi, Mumbai, Bangalore and Hyderabad, as well as the Samsung India online store, with some special offers from the company. It will be available in other stores post 4 p.m.

Samsung is extending its EMI offer to Galaxy S4 as well.

Vodafone has also launched a special 'all-in-one' tariff plan for pre-paid and post-paid Galaxy S4 customers. Under the plan, for a single-rental customers will get unlimited Internet (with 3GB data allowance under fair usage policy), 3000 local and STD voice minutes and 750 local and national SMS. The rental for this plan will be Rs. 1,199 per month.

For both post-paid and pre-paid customers, Internet speeds will be reduced to 64kbps once the fair usage allowance is exhausted. 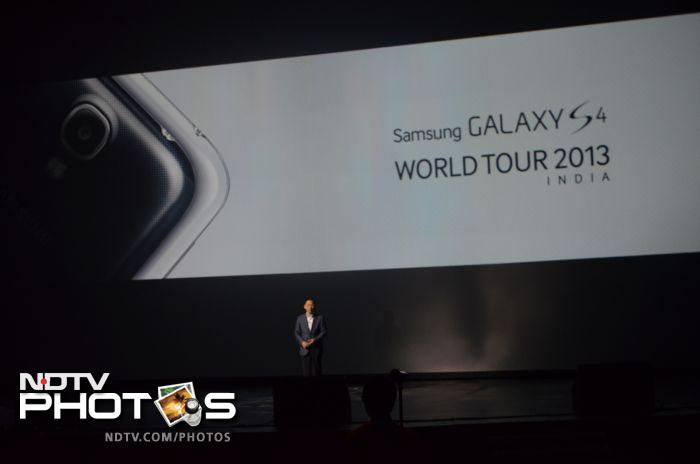 Samsung had unveiled the Galaxy S4 smartphone on 14 March. The phone sports a 5-inch full-HD screen with a resolution of 1080x1920 pixels, and pixel density of 441ppi. It is powered by 1.6GHz Exynos octa-core processor and comes with 2GB of RAM.

Samsung has no plans to launch the 32GB and 64GB variants of the S4 in India as it believe the microSD card slot for expanding the storage will suffice. The Galaxy S4 sports a 13-megapixels rear shooter and a 2-megapixel one on the front. The Galaxy S4 also offers more camera features including dual-shot, employing the use of both front and back camera, an eraser shot mode to remove people from photos, and a Cinemagram like feature called Cinema Photo, among several other tricks.

However, the phone has a noticeable omission in the form of missing FM radio.

"Due to overwhelming global demand of Galaxy S4, the initial supply may be limited. We expect to fulfill inventory to meet demands in the coming weeks," the company said in a statement.

"Demand is far stronger than we had expected and as a result we are having difficulties in fully meeting initial supply requests," Lee Don-joo, head of sales and marketing at Samsung's mobile business, told reporters in Seoul.

Samsung on Friday reported its sixth straight quarter of profit growth ahead of Galaxy S4's debut, the South Korean giant's biggest assault on rival Apple yet. Samsung Galaxy S4 is expected to be available on 327 mobile carriers across 155 countries.