The Android 4.4.3 KitKat update that recently began rolling-out (starting with Google Nexus devices) will reportedly be available for the Galaxy S4 and Galaxy S5 in the next couple of months.

The firmware listed on the leaked document (procured by Android Geeks) for both the Samsung Galaxy S5 SM-G900F and SM-G900H variants are G900FXXUOBNE6 and G900HXXUOBNE3 respectively, while the Galaxy S4 GT-I9506 features firmware number I9506XXUQDNE4. 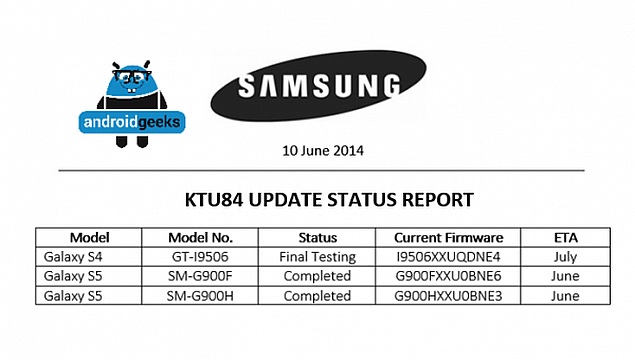 Notably, the Android 4.4.3 KitKat update is an incremental update from Android 4.4.2 KitKat and brings security enhancements and various bug fixes. Further, Google is said to bring few more fixes with its new update which include fixes for data connection loss, random reboots, missed calls and various camera bugs. Other than existing bug fixing, Android 4.4.3 is said to not bring anything significantly new in terms of features and UI interface.

Earlier this month, the Android 4.4.3 KitKat update for the popular Motorola Moto G smartphone was rolled-out for both the single SIM international variant and dual-SIM India variant. The Moto X (Moto X (Review | Pictures) (T-mobile) variant has also received the Android 4.4.3 KitKat update, and this too should soon roll-out in India, as well as the update for the popular Moto E.

Text Messaging Programmes Can Help Control Diabetes: Study
Cortana to Reach China and the UK Within Weeks, Not Months: Microsoft