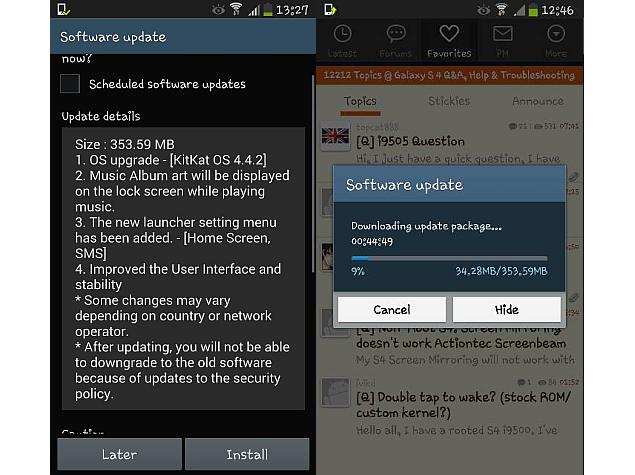 The rollout of the Android 4.4.2 update for the Galaxy S4 GT-I9500 was reported on the XDA developers forum, and is a 353.59MB download. Apart from the numerous updates brought by Android 4.4.2 KitKat, the Galaxy S4 gets a few TouchWiz UI changes as well, as partially detailed by the upgrade screenshot.

Samsung has detailed a few features the Galaxy S4 will get with the v4.4.2 update, such as an improved UI, new launcher settings menu, and that music album art will be displayed on the lock screen. Overall system stability will also be improved, according to the company.

Google and Samsung had announced the Android 4.4.2 update for the Galaxy S4 Google Play Edition in late November.

Samsung has usually kept quite tight-lipped about exact timelines for its updates, but a recently revealed list has indicated a wide range of international Galaxy smartphones and tablets due to get their Android 4.4 KitKat updates, from which the Galaxy S III is conspicuously missing.

So far, few devices are yet to be upgraded to Android 4.4, or launch with it, apart from Google Nexus devices, and Google Play editions. January's Android distribution numbers, showed that users on Android 4.4 KitKat formed only 1.8 percent of the total users, moving up only 0.4 points from last month's 1.4 percent.
Affiliate links may be automatically generated - see our ethics statement for details.
Comments