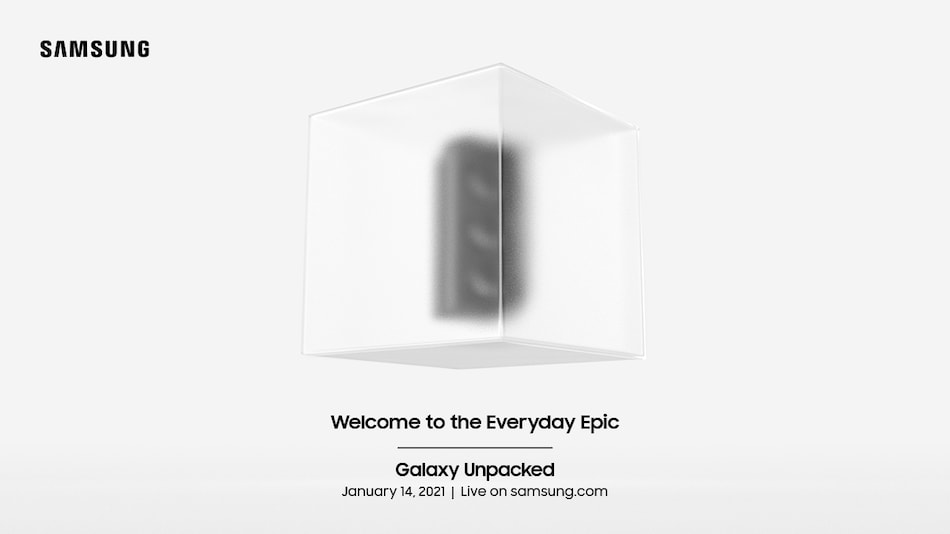 Samsung Galaxy Unpacked event will be held on January 14, the company has confirmed. Reports in the past have claimed that Samsung will be announcing its next-gen Samsung Galaxy ‘S' series flagship lineup on January 14, and now the company has officially announced it is hosting an event on the same day. While it hasn't really announced the monikers of the upcoming Samsung flagship, it did confirm that ‘new experiences' in mobile technology will be unveiled. As per reports, the flagship series will be called the Samsung Galaxy S21 range this year.

The Samsung Galaxy Unpacked 2021 event will be live streamed for all on Samsung.com at 10am EST (8.30pm IST) on January 14 i.e. next Thursday. Samsung has released an official invitation for the event and has published a teaser video that shows a blurry camera module of the Samsung Galaxy S21 series. There seems to be a triple camera setup on the module with the sensors sitting in one vertical line. As mentioned, the names of the phones have not been announced in the release.

WinFuture.de, a popular German publication known for its accurate leaks, recently shared the specifications of all the three phones - Samsung Galaxy S21, Galaxy S21+, and Galaxy S21 Ultra. According to the report, the three phones will come with dual-SIM (Nano) support and run on Android 11 with One UI 3.1 on top. All models are also expected to have an octa-core Exynos 2100 SoC in markets including Germany, though it could be the recently launched Snapdragon 888 in the US and select other markets. The Galaxy S21 and Galaxy S21+ are expected to have 8GB of RAM as standard, along with 128GB and 256GB of onboard storage. There could to be up to 12GB of RAM on board on the Samsung Galaxy S21 Ultra with 128GB, 256GB, and 512GB storage options. Storage is tipped to not be expandable in nature.

Coming to the display, Samsung Galaxy S21 is reported to have a 6.2-inch full-HD+ (1,080x2,400 pixels) Infinity-O Display with Dynamic AMOLED 2X screen and 421ppi pixel density. The Galaxy S21+, on the other hand, could offer the same display in 6.7-inch size and 394ppi of pixel density. Both phones are also expected to have 60-120Hz refresh rate, 1,300 nits of peak brightness, and Gorilla Glass 7 protection on top.

For selfies and video chats, the Galaxy S21 and Galaxy S21+ will come with a 10-megapixel camera sensor at the front along with an f/2.2 lens, according to the report. The lens may have 80-degree of field-of-view (FoV). The Ultra model at the front is likely to have a 40-megapixel 1/2.8-inch sensor has PDAF and laser autofocus features.

Samsung Galaxy S21 may have a 4,000mAh battery, while the battery pack of Galaxy S21+ may come with a capacity of 4,800mAh. Both phones are expected to have 25W fast charging support — alongside Qi wireless charging compatibility. There is expected to be a 5,000mAh battery on board with 45W fast charging support on Samsung Galaxy S21 Ultra. It may support wireless charging as well. Samsung Galaxy S21 Ultra is also expected to support the S Pen as an optional accessory. Connectivity options on the three phones are tipped to include a USB Type-C port, Wi-Fi 6, Bluetooth 5.0, NFC, and 5G. The report says that users in Germany won't get an adapter or earphones bundled-in. The phones may not come bundled with a charger.

The three Samsung Galaxy S21 phones are also expected to be IP68-certified rating for dust and water resistance, and feature an in-display fingerprint sensor.

Roku Said to Be in Talks to Buy Quibi Content Catalogue: Report