Samsung Galaxy S20 has purportedly appeared on benchmark portal Geekbench just days after the Galaxy S20+ was spotted on the same source. The benchmark listing of the upcoming Samsung phone suggests that 12GB of RAM would be the minimum option in the new lineup that is speculated to have the Galaxy S20+ and Galaxy S20 Ultra as the higher-end models in addition to the Galaxy S20. Separately, a video comparing the Galaxy S20 dummies hints the size differences of the three new flagships.

As per the benchmark listing on the Geekbench site that has January 16 as the upload date, the Samsung phone carries model number SM-G981U. This seems to be the North American 5G variant of the Samsung Galaxy S20. The listing shows that the phone runs Android 10 and is powered by a Qualcomm SoC, paired with 12GB of RAM.

The fresh benchmark listing doesn't reveal anything new. However, as noted by SamMobile, it suggests that 12GB of RAM would be the minimum option in the lineup since mostly base models get benchmarked before a flagship phone is launched. 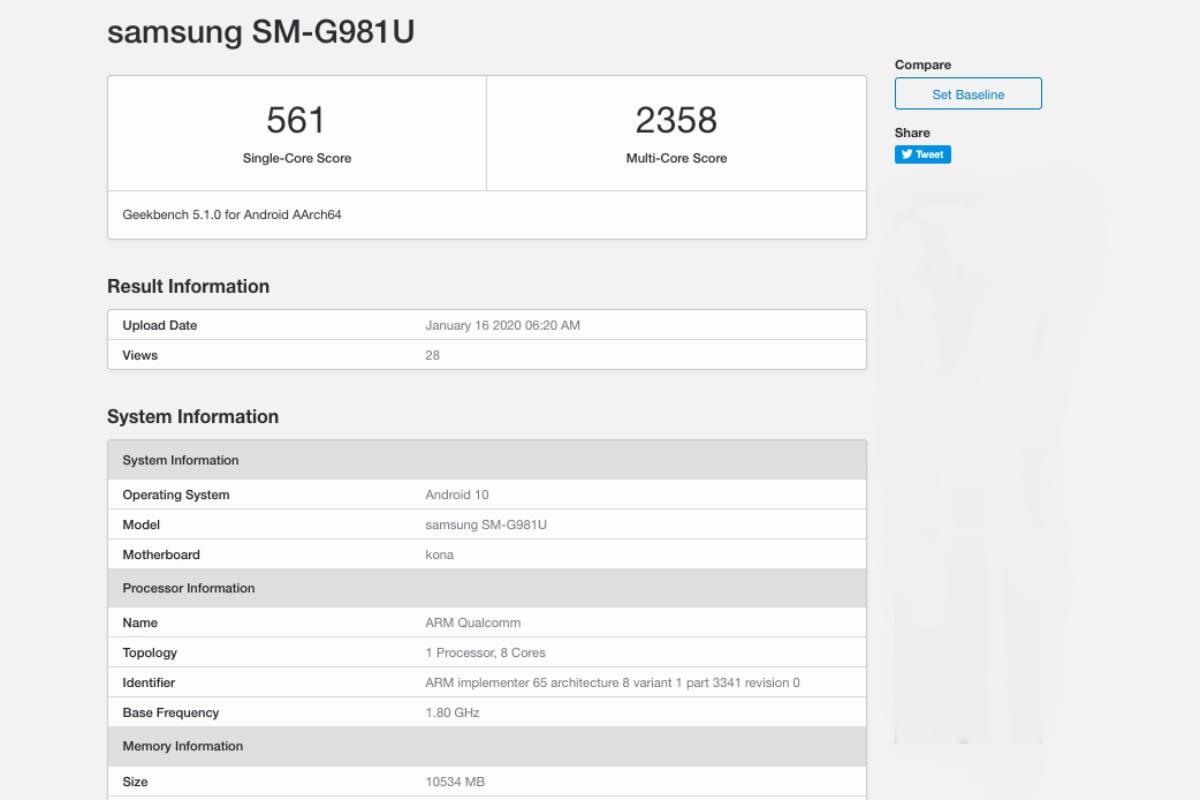 Having said that, you can expect a toned down, 8GB RAM option for me the LTE variant of the Galaxy S20 that would arrive in markets such as India.

In addition to the listing on the Geekbench site, a video by XDA Developers has been released on YouTube that is claimed to showcase 3D printed Samsung Galaxy S20 dummies based on the data obtained from a case maker. The video shows the design-level differences that would come on the Galaxy S20, Galaxy S20+, and Galaxy S20 Ultra.

The Galaxy S20, as per the video, with a 6.2 or 6.3-inch display isn't likely to be substantially bigger in size over the Galaxy S10 that has a 6.1-inch display. This could be due to a taller aspect ratio. Also, you may get a narrower build over what you'll get on the Samsung Galaxy S10.

On the part of the Samsung Galaxy S20 Ultra, the phone that is speculated to be the successor to the Galaxy S10+, the video suggests that you'd get a taller design over the Samsung Galaxy Note 10+. The rounded edges on the phone may help make it a friendly option for one-handed operations, though.

Gadgets 360 wasn't able to independently verify the details provided in the video. It is, thus, safe to consider the reported designs with a pinch of salt.

Samsung is hosting the Galaxy Unpacked 2020 event in San Francisco, California, on February 11 where it is expected to unveil the Galaxy S20 models alongside its next-generation foldable phone. You should stay tuned to Gadgets 360 to catch all the latest updates on the upcoming Samsung phones.