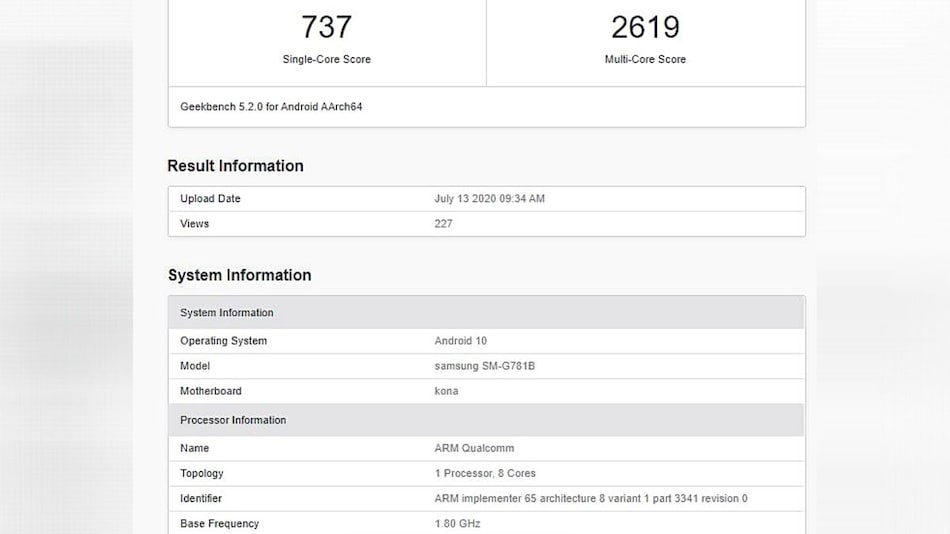 Samsung Galaxy S20 Lite will likely launch as Galaxy S20 Fan Edition in October, a report had indicated. Ahead of its launch, it appears that the rumoured Samsung phone has reached the benchmarking website, Geekbench with the model number SM-G781B. The phone on Geekbench site is further listed with Android 10 and 6GB RAM. As its name suggests, the Samsung Galaxy S20 Lite is expected to be a watered-down variant of the Galaxy S20 flagship and a successor of Galaxy S10 Lite.

The Geekbench listing further highlights the Samsung phone with Android 10, 6GB RAM, and octa-core Qualcomm Snapdragon 865 SoC. While the listing does not explicitly state the name of the processor, it mentions 'Kona' that is the codename for the Snapdragon 865 SoC. Lastly, the Samsung device scores 737 points and 2619 points in single-core and multi-core tests, respectively, according to Geekbench. The Geekbench listing was spotted by GSMArena.

Earlier in June, a report had suggested that the 'lite' variant of the Samsung Galaxy S20 would pack 128GB onboard storage and run One UI 2.5. The phone is expected to debut in October as Galaxy S20 Fan Edition, or Galaxy S20 Pen Edition.

The Samsung Galaxy S20 series was globally launched in February this year. The US variant of the vanilla Galaxy S20 packs Qualcomm Snapdragon 865 SoC, up to 12GB RAM, 128GB storage, triple rear cameras and a 4,000mAh battery.