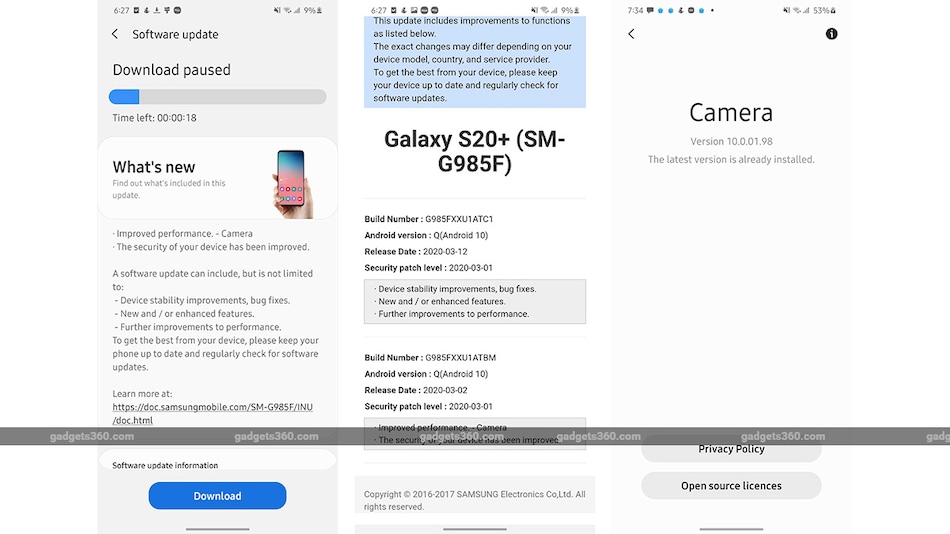 A new OTA update is rolling out in India now, for the Samsung Galaxy S20+

Just the other day, we heard rumours that Samsung is preparing to launch a big update for its Galaxy S20 series, which would reportedly fix many issues that users have been facing. Today, our Indian Galaxy S20+ unit picked up a new firmware update, which simply mentioned improvements to the camera. The update appears to be rolling out right now India, although we're not sure if a similar update is being pushed to the Galaxy S20 and Galaxy S20 Ultra too. We didn't face any specific issues with the cameras on our unit but an improvement is always welcomed. If you're in India and have one of the Galaxy S20 models, then be sure to check for an update right now.

The update is 366.57MB in size and the changes include improvements to the security and the performance of the camera for the Galaxy S20+ (Review). The build number has also been updated to G985FXXU1ATBM, from the previous G985FXXU1ATC1. The changelog doesn't mention what specific improvements have been made to the camera, so unless you were facing some issue, it's worth applying this update and checking if it's fixed. SamMobile reports the new build updates the camera app to v10.0.01.98, and claims a similar update is rolling out to other Samsung Galaxy S20 models as well - the Galaxy S20 and Galaxy S20 Ultra.

A couple of days back, we heard rumours that Samsung was working on releasing a ‘big' update for its phones, which would reportedly fix issues such as Wi-Fi stability, freezing of the camera app and so on. It's hard to say if this is that very same update, which was promised or if another one is on the way.

Recently, Galaxy S20 users in the US and Canada also reported a GPS issue with their phones, claiming that it would struggle to lock their exact location, when using apps such as Google Maps or Waze. It's possible that this issue is restricted to the Snapdragon 865-based units, which are sold in those countries.