At the event, Samsung also unveiled the Samsung Galaxy Fold. The Samsung Galaxy S10 and Galaxy S10+ are also the first to introduce an ultrasonic in-display fingerprint sensor on Samsung smartphones, said to be the "most advanced embedded fingerprint scanning method." This, along with the Infinity-O Display panels (seen on all three smartphones) can be considered the biggest highlights of the series. As we mentioned, the smartphones feature Dynamic AMOLED displays, said to be the first HDR10+ certified displays with a peak brightness of 1,200 nits. The displays are touted to have blue light reduction features, apart from improved colour accuracy, and outdoor visibility. On the other hand, the Samsung Galaxy S10e sports a capacitive fingerprint sensor on the home button. Samsung touts the model to offer a "premium experience in a compact size."

Other highlight features of the Samsung Galaxy S10-Series include Wi-Fi 802.11ax support, Dolby Atmos for Gaming, Vapor Chamber cooling (on the Galaxy S10+), Fast Wireless Charging 2.0 (said to be 30 percent faster than the previous generation, compatible with WPC and PMA standards), and Wireless PowerShare (which allows users to charge other Qi Wireless charging devices - such as the new Galaxy Buds and Galaxy Watch Active, or other Qi-compatible smartphones - using the phones). Wired charging on the smartphones is compatible with Quick Charge 2.0 and Adaptive Fast Charging.

Like the previous Galaxy S generation, the Galaxy S10-Series is also IP68-certified for dust and water resistance. Finally, the series also features what Samsung calls "AI-powered performance", examples of which include where the software preloads commonly used apps, recommends Bixby routines based on usage, and has an Adaptive Power feature that optimises battery life based on user behaviour. All three phones will be available in dual-SIM variants, depending on the region.

All three Samsung Galaxy S10-Series phones will go on sale in March 8 in the US, while pre-orders in the US open tomorrow, i.e., February 21.

For now, Samsung has not detailed the price of the Galaxy S10 5G variant, but said it will become available via Verizon in the US before being made available via other US-based carriers later in the 'Summer'

The Samsung Galaxy S10 will be available in a dual-SIM variant in some regions. It runs on Android 9.0 Pie, with the company's One UI customisation on top. The Galaxy S10 features a 6.1-inch QHD+ Curved Dynamic AMOLED Infinity-O Display with a 19:9 aspect ratio and a 550ppi pixel density. It is powered by the 7nm octa-core Qualcomm Snapdragon 855 SoC (2.8GHz+2.4GHz+1.7GHz) in some regions, and the 8nm octa-core Samsung Exynos 9820 SoC (2.7GHz+2.3GHz+1.9GHz) in other regions such as India. It features 8GB of LPDDR4x RAM.

There is a triple rear camera setup on the Samsung Galaxy S10, with the company's Dual OIS (optical image stabilisation) technology. The setup consists of a 12-megapixel 77-degree lens wide-angle camera coupled with 2PD autofocus, a variable aperture ranging from f/1.5 to f/2.4, and OIS; a 12-megapixel 45-degree lens telephoto (0.5x and 2x optical zoom) camera with autofocus, an f/2.4 aperture, and OIS; apart from a 16-megapixel 123-degree ultra-wide lens camera with fixed focus and an f/2.2 aperture. The setup also provides up to 10x digital zoom.

On the front, the Samsung Galaxy S10 uses a single selfie camera - a 10-megapixel sensor coupled with 2PD autofocus, an f/1.9 aperture, and 80-degree lens. The Galaxy S10 comes in two inbuilt storage variants - 128GB and 512GB - both of which are expandable via microSD card (up to 512GB).

The Samsung Galaxy S10+ is identical to the Galaxy S10 in several ways. It features a larger 6.4-inch QHD+ Curved Dynamic AMOLED Infinity-O Display, retaining the same 19:9 aspect ratio but having a lower pixel density of 438ppi. It is powered by the same processors, but apart from 8GB of LPDDR4x RAM, also features a 12GB LPDDR4x RAM option.

The rear camera setup on the Galaxy S10+ is identical to the Galaxy S10, however, on the front, the smartphone features a dual selfie camera - a first for the company. The primary selfie camera is the same as the sensor on the Galaxy S10, coupled with an 8-megapixel fixed focus RGB depth sensor featuring an f/2.2 aperture and a 90-degree lens. The Galaxy S10+ comes in three inbuilt storage variants - 128GB, 512GB, and 1TB - all three of which are expandable via microSD card (up to 512GB).

It features the same sensors, including the ultrasonic in-display fingerprint sensor, as well as the same connectivity options. It runs on a 4,100mAh battery. It measures 157.6x74.1x7.8mm, and weighs 175 grams. 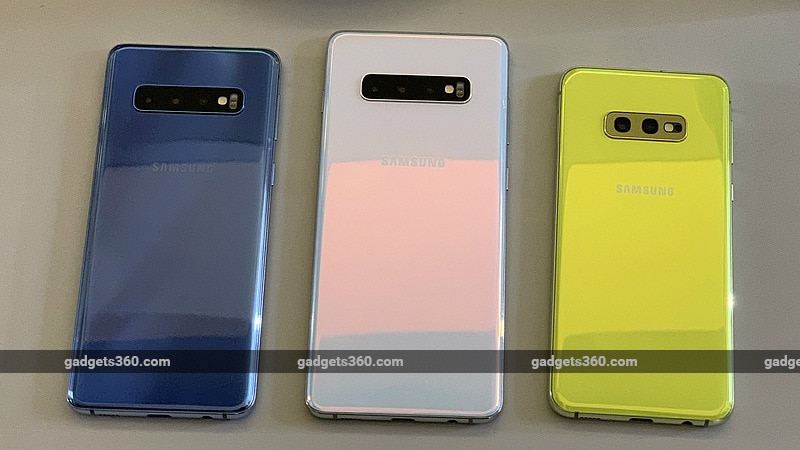 The Samsung Galaxy S10e is similar to the Galaxy S10 and Galaxy S10+, but there are some prominent differences. It features a much smaller 5.8-inch full-HD+ Flat Dynamic AMOLED Infinity-O Display, but the second highest pixel density of the three - 522ppi. While it comes in the same processor options, it will be available with choices of 6GB and 8GB of RAM.

As for the cameras, the Samsung Galaxy S10e rear setup is different from the Galaxy S10 and Galaxy S10+. Instead of a triple rear camera setup, the Galaxy S10e features a dual rear camera setup - the first is a 12-megapixel camera with 77-degree wide-angle lens, 2PD autofocus, a variable aperture of f/1.5 to f/2.4, and OIS; the second is a 16-megapixel fixed focus camera with a 123-degree ultra-wide lens, and an f/2.2 aperture. The setup is capable of providing 0.5x optical zoom, and up to 8x digital zoom. The front camera is the same as the Galaxy S10's.

The Samsung Galaxy S10e comes in two inbuilt storage variants - 128GB and 256GB - both of which are expandable via microSD card (up to 512GB). It features the same connectivity options, and while the sensors are mostly the same, the smartphone foregoes the heart rate sensor. As we mentioned, it also uses a capacitive fingerprint sensor on the home button instead of the ultrasonic in-display fingerprint sensor. It is powered by a 3,100mAh battery, measures 142.2x69.9x7.9mm (making it 1mm thicker than the Galaxy S10 and Galaxy S10+ duo), and weighs 150 grams.

The single-SIM Samsung Galaxy S10 5G sports a Quad-HD+ Curved Dynamic AMOLED display with a 505ppi pixel density and a 19:9 aspect ratio. It too will be available with the same processor options, but coupled with 8GB of RAM and 256GB of inbuilt storage - which is not expandable via microSD card. It bears a quad rear camera setup, with three of the same sensors and lenses as the Galaxy S10 and Galaxy S10+, but adding a 3D Depth sensor with a hQVGA resolution. On the front, it bears a 10-megapixel Dual Pixel AF with an f/1.9 aperture and 80-degree lens. There is a second front camera, once again a 3D Depth Camera with a hQVGA resolution.