Samsung Galaxy S10 Series has officially been launched in India, and the price of the three variants - Galaxy S10e, Galaxy S10, and Galaxy S10+ - will begin from Rs. 55,900. The three phones were originally introduced last month at the Galaxy Unpacked 2019 event in San Francisco, and have been on pre-order in India for a while. The key features of the three smartphones include Infinity-O Displays with Dynamic AMOLED panels, 8nm octa-core Samsung Exynos 9820 SoC, and Android 9 Pie with One UI. The phones come with a slew of launch offers from telecom partners, as well as a cashback from HDFC Bank.

The cheapest Samsung Galaxy S10e price in India is set at Rs. 55,900 for the lone 6GB RAM/ 128GB storage variant. It will go on sale in both Prism Black and Prism White colour options.

Lastly, the Samsung Galaxy S10+ price in India begins at Rs. 73,900 for the 8GB RAM/ 128GB storage option, going up to Rs. 91,900 for the 8GB RAM/ 512GB option, and Rs. 1,17,900 for the 12GB RAM/ 1TB storage configuration. The 512GB and 1TB storage variants of the Galaxy S10+ will be available in Ceramic Black and Ceramic White colour variants, whereas the 128GB storage model will be available in Prism Black, Prism Blue, and Prism White colour options.

The Galaxy S10 smartphones will go on sale in the country from March 8, via Samsung's own site, Amazon India, Paytm Mall, Flipkart, Tata CliQ, and select offline stores. Those who have pre-booked the smartphones already, deliveries will begin from today. Pre-bookings, which opened late last month, will continue until Thursday, March 7. The series is also available via Airtel Online Store with a down payment starting Rs. 7,499 and an EMI of Rs. 2,599.

Samsung Galaxy S10 series buyers will be able to get the Galaxy Buds at Rs. 4,999 until March 31. Other launch offers include a Samsung Upgrade exchange bonus up to Rs. 15,000, HDFC Bank cashback on credit/ debit cards up to Rs. 6,000, Airtel cashback up to Rs. 3,600 (across 24 recharges or 24 months, whichever is earlier on recharge pack of Rs. 349), Vodafone Netflix subscription worth Rs. 6,000 (on Red postpaid plans starting at Rs. 499 and purchase of the Galaxy S10 through its site), and Jio benefits up to Rs. 14,997 (these include 1 additional year of unlimited services, with double data benefits when recharging with the Rs. 4,999 plan).

As for the Galaxy Watch Active and Galaxy Fit, Samsung says they will be "launched in a couple of months", and hasn't yet provided pricing details.

The dual-SIM Samsung Galaxy S10 will run on Android 9.0 Pie, with the company's One UI customisation on top. The Galaxy S10 features a 6.1-inch QHD+ Curved Dynamic AMOLED Infinity-O Display with a 19:9 aspect ratio and a 550ppi pixel density. It is powered by the 8nm octa-core Samsung Exynos 9820 SoC (2.7GHz+2.3GHz+1.9GHz) in India. It features 8GB of LPDDR4x RAM.

There is a triple rear camera setup on the Samsung Galaxy S10, with the company's Dual OIS (optical image stabilisation) technology. The setup consists of a 12-megapixel 77-degree lens wide-angle camera coupled with 2PD autofocus, a variable aperture ranging from f/1.5 to f/2.4, and OIS; a 12-megapixel 45-degree lens telephoto (0.5x and 2x optical zoom) camera with autofocus, an f/2.4 aperture, and OIS; apart from a 16-megapixel 123-degree ultra-wide lens camera with fixed focus and an f/2.2 aperture. The setup also provides up to 10x digital zoom.

On the front, the Samsung Galaxy S10 uses a single selfie camera - a 10-megapixel sensor coupled with 2PD autofocus, an f/1.9 aperture, and 80-degree lens. The Galaxy S10 comes in two inbuilt storage variants - 128GB and 512GB - both of which are expandable via microSD card (up to 512GB).

The rear camera setup on the Galaxy S10+ is identical to the Galaxy S10, however, on the front, the smartphone features a dual selfie camera - a first for the company. The primary selfie camera is the same as the sensor on the Galaxy S10, coupled with an 8-megapixel fixed focus RGB depth sensor featuring an f/2.2 aperture and a 90-degree lens. The Galaxy S10+ comes in three inbuilt storage variants - 128GB, 512GB, and 1TB - all three of which are expandable via microSD card (up to 512GB).

It features the same sensors, including the ultrasonic in-display fingerprint sensor, as well as the same connectivity options. It runs on a 4,100mAh battery. It measures 157.6x74.1x7.8mm, and weighs 175 grams.

Samsung Galaxy S10e specifications
The Samsung Galaxy S10e is similar to the Galaxy S10 and Galaxy S10+, but there are some prominent differences. It features a much smaller 5.8-inch full-HD+ Flat Dynamic AMOLED Infinity-O Display, but the second highest pixel density of the three - 522ppi. While it comes in the same processor, it will be available with choices of 6GB and 8GB of RAM. 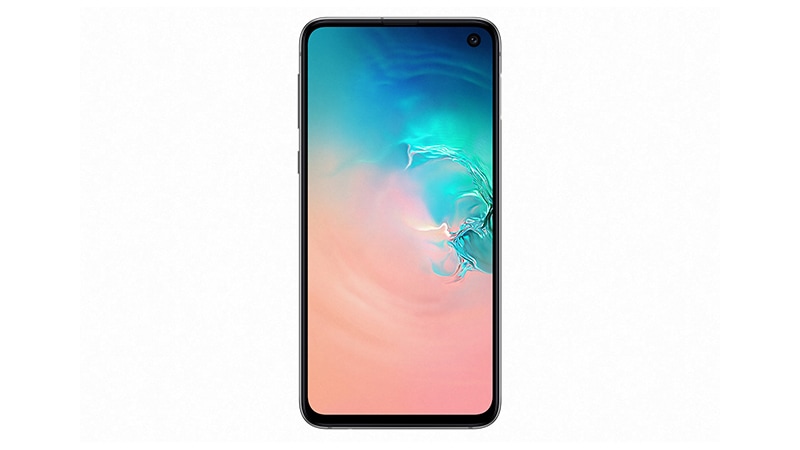 As for the cameras, the Samsung Galaxy S10e rear setup is different from the Galaxy S10 and Galaxy S10+. Instead of a triple rear camera setup, the Galaxy S10e features a dual rear camera setup - the first is a 12-megapixel camera with 77-degree wide-angle lens, 2PD autofocus, a variable aperture of f/1.5 to f/2.4, and OIS; the second is a 16-megapixel fixed focus camera with a 123-degree ultra-wide lens, and an f/2.2 aperture. The setup is capable of providing 0.5x optical zoom, and up to 8x digital zoom. The front camera is the same as the Galaxy S10's.

The Samsung Galaxy S10e comes in two inbuilt storage variants - 128GB and 256GB - both of which are expandable via microSD card (up to 512GB). It features the same connectivity options, and while the sensors are mostly the same, the smartphone foregoes the heart rate sensor. As we mentioned, it also uses a capacitive fingerprint sensor on the home button instead of the ultrasonic in-display fingerprint sensor. It is powered by a 3,100mAh battery, measures 142.2x69.9x7.9mm (making it 1mm thicker than the Galaxy S10 and Galaxy S10+ duo), and weighs 150 grams.