We are just hours away from Samsung's Galaxy Unpacked launch event where the Galaxy S10 series will make its grand debut, but there is no stopping the torrent of leaks. The Samsung Galaxy S10 has yet again surfaced online in an alleged hands-on video alongside the Galaxy S10+, giving us a glimpse of their design as well as the Galaxy Buds. Moreover, official and third-party protective cases that will reportedly work with the Galaxy S10's in-display fingerprint sensor have also been leaked. Also, alleged renders of the official protective cases for the Galaxy S10 series have also been leaked. To remind you, Samsung is hosting a press event later today in San Francisco where it will be launching the new Galaxy S10 family of smartphones.

Starting with the hands-on clip, it is claimed to be a preview video detailing the Galaxy S10 and the Galaxy S10+ that has now been removed. The video reportedly showcased the complete design of both the smartphones and also talked about their imaging hardware. Interestingly, the video also allegedly revealed that both the smartphones will come with support for reverse wireless charging and one of them was shown juicing up the Galaxy Buds' battery kept on the smartphone's rear panel while still in the case. While the Galaxy S10+ appeared reportedly appeared in a hands-on video a few days ago, the new leak marks the first time that the Galaxy Buds have been seen in action. 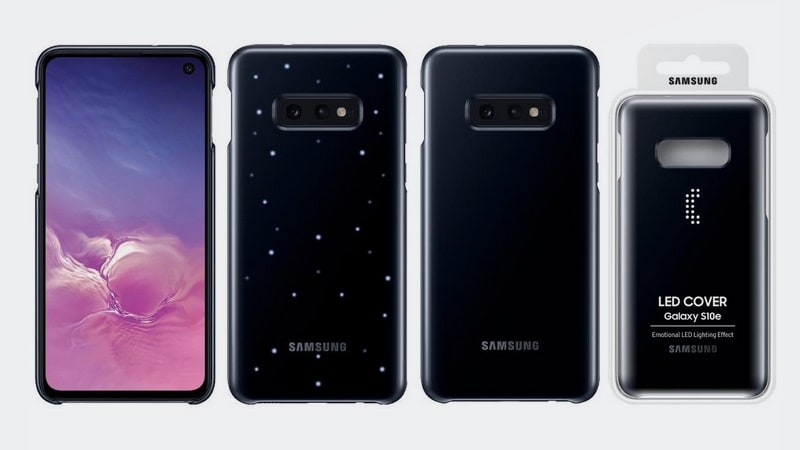 Additionally, multiple renders of what is claimed to be official protective cases for the Galaxy S10 trio have also surfaced online. WinFuture's Roland Quandt has leaked protective cases for the Samsung Galaxy S10e that flaunt a dot-like pattern on the rear panel and might be marketed as the official Samsung Galaxy S10e LED cover with “Emotional LED Lighting Effect”. Another set of renders claiming to depict the official Samsung Covers for the Galaxy S10 have also surfaced online and they show multiple designs and colour options. 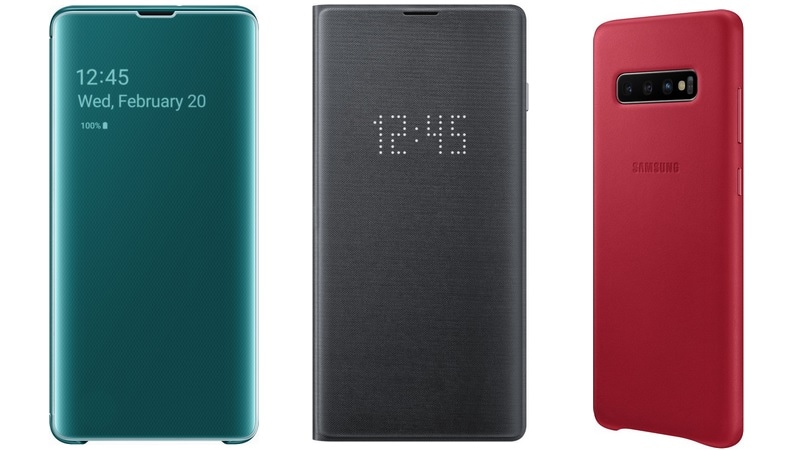 Talking about the company's official product merchandise, Samsung will reportedly offer an LED cover, LED View cover, Silicon cover, protective standing cover, leather cover, Clear View cover, and screen protector for the Galaxy S10, Galaxy S10e, and the Galaxy S10+ in a variety of colours. Moreover, clear covers and pattern covers will also be made available, as per an extensive leak by DroidShout. Tipster Ishan Agarwal has also contributed a couple of renders which claim to show official marketing images of the Samsung Galaxy S10+, wirelessly charging the Galaxy Buds. The renders show the Galaxy S10 buds in white colour in a charging case flaunting the same shade, contrary to the leaked hands-on video which depicts them in black. 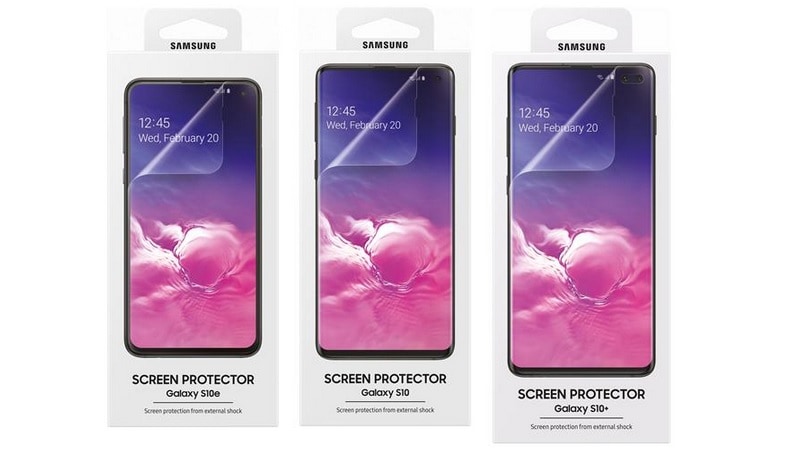 But in addition to Samsung, third-party screen protectors for the Galaxy S10 series that will work fine with the in-display fingerprint sensor will reportedly also be made available. The Dome Glass, a tempered glass screen protector from a company called Whitestone, will allegedly work just fine with the in-display fingerprint sensor, thanks to the absence of air gaps that impede the authentication process. The WhiteStone Dome Glass has reportedly been certified by Samsung
Photo Credit: DroidLife

The company claims that it has utilised the Liquid Optically Clear Adhesive (LOCA) technology to remove the air gaps and make the Dome glass work perfectly with the Galaxy S10's in-display fingerprint sensor. Moreover, the Whitestone Dome Glass is also claimed to be the only tempered glass accepted as a partner for the Samsung Mobile Accessory Partnership Program (SMAPP). However, the listing for the tempered glass has been removed from the Whitestone website.

Lastly, Samsung is reportedly also holding Galaxy S10 preview events across multiple Indian cities on February 21 following the Galaxy Unpacked event scheduled for today. As per SamMobile, the preview events will start at 5:30pm IST in Bengaluru, Chandigarh, Chennai, Delhi, Gurugram, Kolkata, Mumbai, and Pune. There is no registration protocol and anyone in the vicinity of the preview event can get to experience the flagship smartphones, the report adds.