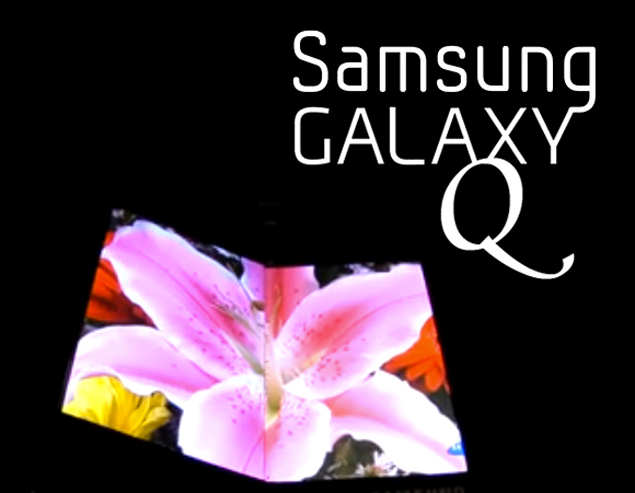 We already know that Samsung is planning to launch multiple devices this year and the Mobile World Congress sets the perfect stage for the company to showcase some of its devices as part of its 2013 lineup. Here's another one that's added to that list.

Rumour has it that the Korean electronics giant could debut the Galaxy Q, a new smartphone that features a foldable display, reports SlashGear. Samsung unveiled its Youm flexible display technology at CES last month and it is likely to feature on the Galaxy Q.

MobileGeeks.de seems to have been tipped of some GLBenchmark tests of a device with the model number GT-B9150. The results apparently match the Galaxy Q, indicating that the folding phone with dual 1080p displays (earlier sightings revealed 720p displays) is not far away from launch.

The GLBenchmark report seems to be in line with earlier rumours suggesting that the Galaxy Q could feature two 5.3-inch 1080p AMOLED displays, a 1.7GHz dual-core Exynos processor, 2GB of memory, 8-megapixel and 2-megapixel cameras and a 3500 mAh battery, according to SlashGear.

Here's a video from 2008, which reportedly shows an early version of the technology that is used to make the two screens of the Galaxy Q fit together without a divide in between. The concept seems very appealing, though back then, it was in its very initial stages and not really ready for pubic release.

Samsung's bendable OLED Youm technology uses thin plastic instead of glass, thereby making it virtually unbreakable. The company flaunted a curvaceous prototype at CES this year featuring a wrap-around screen that took the display and the content on it, around the edges of the device.

Furthermore, Samsung also announced that it's developing a 10.1-inch LCD panel that will use 25 percent less of the energy in the current iteration without compromising on the resolution.

Samsung had showcased two prototypes with flexible displays at CES 2011 as well. One was a paper-thin 4.5-inch screen with a WVGA (800x480 pixel) resolution that bends like an arc. The other was a transparent qFHD (quad full high definition) AMOLED display that Samsung claimed to be working on for TVs and monitors.

Looks like 2013 will finally witness the advent of flexible displays pioneered by Samsung and spark a new trend for such a technology to feature on smartphones and tablets.
Comments