Samsung has not only confirmed the sketchy numeral skipping rumour, it also gave its thumbs up on the heavily speculated August 2 launch date. Now a new report tips that the Galaxy Note7 will go on sale on the same day, while new leaks once again tip the iris scanner and dual-edge screen are being introduced with Samsung's latest flagship.

A report by South Korean publication ET News tips that both LG and Samsung are pushing forward the release of their next flagship smartphones, with Samsung now tipped to put the Galaxy Note7 up for sale as early as August 2 in South Korea. LG on the other hand is tipped to bring the successor of the LG V10 to markets as early as September.

The report says Samsung is looking to make the Galaxy Note7 available to buy before the Rio Summer Olympics kick off on August 5, where it is the official wireless partner.

In the meanwhile, fresh images leaked out of China (via Techtastic.nl) show the iris scanner in action. Past leaks decoded the iris scanner on the basis of additional sensors on top of the display, but these images pretty much confirm the feature by showing the iris scanning procedure running on the phablet. One of the photos show two 'eye' holes on the top half of the screen, and a pattern unlock square in the bottom half, with text that reads 'Use iris or draw pattern'. 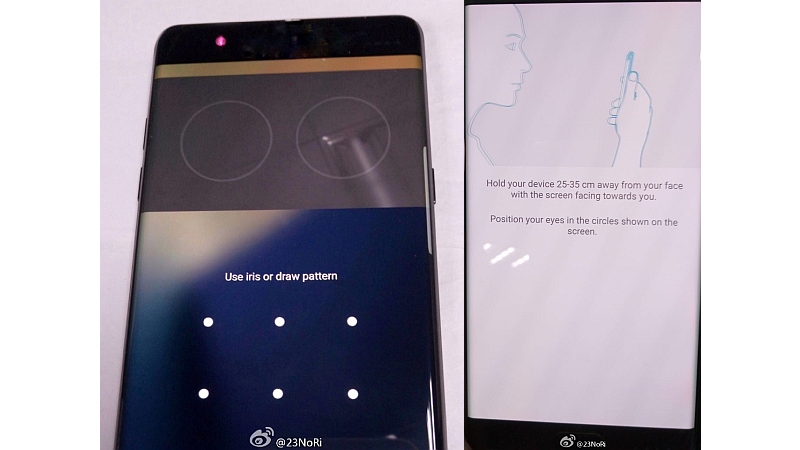 The next image gives details on how users will be able to feed their iris information into the phablet. 'Hold the device 25-35cm away from your face, with screen facing towards you. Position your eyes in the circles shown on the screen,' the instructions read.

A separate set of photos leaked by the same tipster on Weibo shows the Samsung Galaxy Note7 from all angles. The images speak the same story as all the past leaks i.e. the addition of a dual-edged screen, and the iris scanners on the top bezel. The sides hint at the thinness of the phablet, also showing off the slim buttons that sit there.Purported leaks suggest a 6-inch QHD Amoled display, with an Exynos 8893 chipset (or Snapdragon 821 SoC) paired alongside a 6GB RAM. It is tipped to be waterproof, and come with three inbuilt storage options - 64GB, 128GB, and 256GB; a 12-megapixel rear camera; 5-megapixel front camera, and a 3600mAh battery.