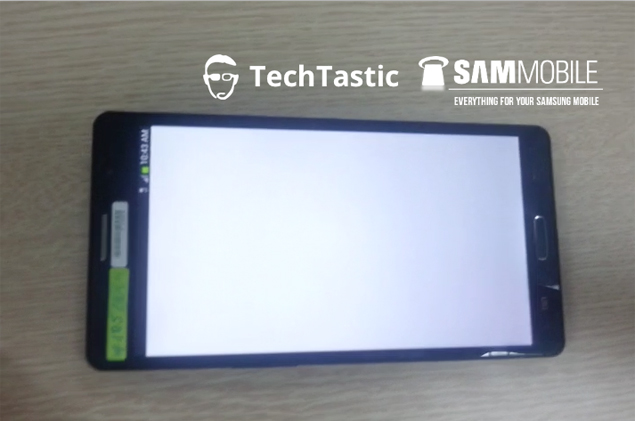 Photographs of a Samsung prototype smartphone with a large screen have surfaced online.

However, even the source of the report is not sure whether the massive smartphone in the photographs is the Samsung Galaxy Note III. Since the bezel and the shape of the device do not resemble the Mega 6.3, some believe it can be assumed that the smartphone in the pictures is indeed the Note III.

The website also states that the resolution on the device happens to be full-HD. As far as the device in the photographs is concerned, it sports a design similar to the first Samsung Galaxy Note but with a home button similar to the new Galaxy smartphones such as the Samsung Galaxy S4. The device is also said to have a 6-inch full-HD AMOLED display and a 13-megapixel rear camera. Hence, the full-HD display and the big screen size of the smartphone in the leaked images might actually be the Galaxy Note III.

Previous rumours state that the phablet will be powered by a Snapdragon 800 chipset. The chip targets top-end smartphones and has 75 percent more horsepower than Qualcomm's old top-of-the-line model, enough to record and playback Ultra HD video as per the company. However, as per Qualcomm's own benchmarks, it doesn't consume more power, so battery life is not an issue. The Snapdragon 800 chipset has a quad-core Krait 400 processor that supports clock speeds of up to 2.3GHz.

The Samsung Galaxy Note III was recently also spotted on the company's Kazakhstan website.  The much anticipated device is expected to be launched at the IFA in September.