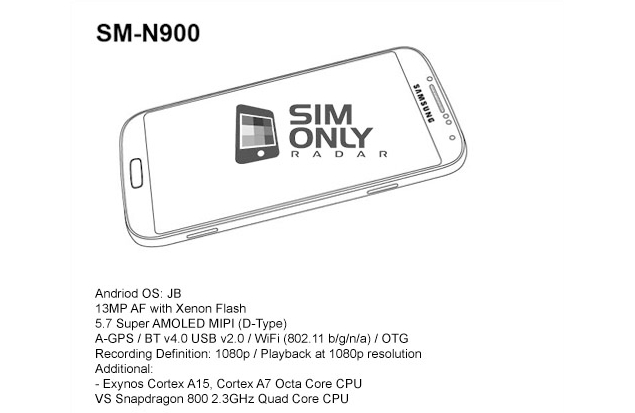 Samsung is said to be working on the next generation Galaxy Note smartphone, that kicked off the phablet category across the world, a few years ago. There have been a number of leaks and rumours related to the next iteration of Samsung's popular Note series large screen phone since the last few weeks.

A new report claims to shed some light on the specifications of the next generation Note device and also reveals the presence of a Xenon Flash at the back of the phone. A Dutch site, SIM Only Radar has published a couple of sketches that reveal design and specifications of the Galaxy Note III.

According to the schematics, the upcoming Galaxy Note III will be referred to as SM-N900 and the phablet will feature a Xenon Flash and a physical camera key. The first sketch depicts the front panel with some specifications written below it. While another sketch shows the back cover and reveals the presence of a Xenon Flash which will accompany the rear camera. The Samsung Galaxy Note III is said to sport a 5.7-inch display which will most likely be a Super AMOLED panel similar to Samsung's other high-end devices.

The display is expected to be full-HD with a resolution of 1080x1920 pixels. However, the schematics clear the air about a possible revamp in design. The sketch certainly reveals that the design of the phone would be inline with Samsung's other Galaxy devices. On the software front, there are speculations that Samsung may load the latest version of Android, Android 4.3, which is expected to be unveiled with the next-generation Nexus tablets in the coming days.

The Samsung Galaxy Note III is rumoured to sport a 13-megapixel rear camera with Xenon Flash and will support full-HD recording. Much like its predecessor, the Galaxy Note II, this phone is also likely to feature an S-Pen (stylus) and the suit of apps preloaded with it.

Earlier, it was reported that Samsung is likely to unveil the Galaxy Note III on September 4, 2013.