Samsung will launch the much-awaited Galaxy Note 9 at its Galaxy Unpacked event on August 9, and ahead of the unveiling, we are getting more details about the upcoming flagship. While several features and specifications of the Galaxy Note 9 have been spotted in leaks, a fresh report suggests that the smartphone's stylus may be in for a major upgrade. The S Pen will reportedly double as a Bluetooth controller for the Galaxy Note 9. This means it may give it several functionalities, such as controlling music and capture images. Separately, images of an alleged Samsung Galaxy Tab S4 have surfaced online. The device is also expected to be released soon.

In the official invite for 2018's second iteration of Galaxy Unpacked event, a clip provides us with a glimpse at the S Pen stylus of the upcoming flagship Note series smartphone. The S Pen is a flagship feature of the company's Galaxy Note devices. However, until now, the stylus' features were limited to writing, drawing, and navigating menus. The addition of Bluetooth support could provide the S Pen a whole new life as a remote controller for different tasks. Since Samsung's teaser for the Galaxy Note 9 specifically highlighted the S Pen gives a lot of credibility to this piece of information.

Popular tipster Ice Universe claimed in a post on Weibo, shared via SamMobile, the key upgrade Samsung will be making is the addition of the new remote features. The stylus in Samsung Galaxy Note 9 will reportedly come with Bluetooth support to enable new features. The new features that could make their way into the S Pen are said to be music playback controls and the ability to control photo capture from a distance. The same source put up a post on Twitter with similar claims.

Notably, this is not the first time we are hearing the above information. In a hands-on rumoured video, Russian tipster Eldar Murtazin had said that the Galaxy Note 9 has completely reworked the S Pen stylus to include Bluetooth support and the option to unlock the handset remotely, with a press of a button.

Coming to the Galaxy Tab S4, Samsung has long been rumoured to launch the tablet but not much information about the device has been available. Meanwhile, new renders shared by Android Headlines, have tipped some details. As per the latest leak, the Tab S3 successor will not come with a home button. The tablet appears to have thinner bezels. 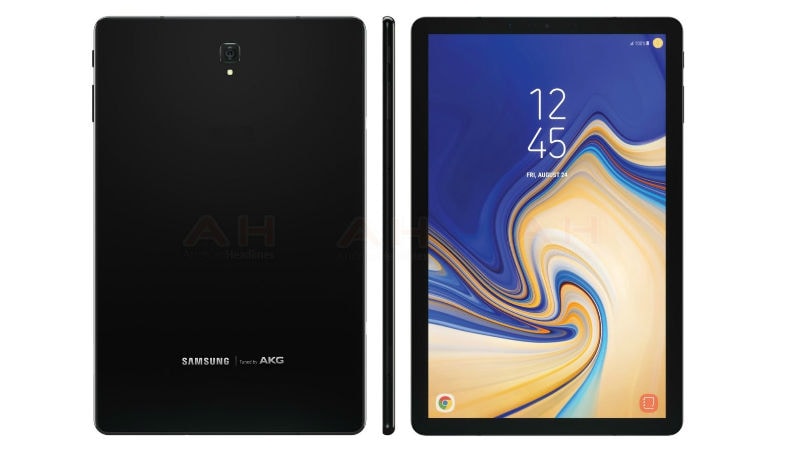 The back of the Samsung Galaxy Tab S4 resembles its predecessor as it comes with a similar design and a single rear camera. However, the Samsung logo has been shifted from the front to the back, possibly to make space for an Iris scanner at the top. But, it cannot be seen in the leaked renders. Also, the lack of a home button also suggests that there could be an under-display fingerprint scanner as well.

To recall, the Galaxy Tab S4 was recently spotted on US FCC. In terms of specifications, a listing had previously mentioned a 10.5-inch 2560x1600 pixels screen and a 2.3GHz octa-core Qualcomm processor alongside Adreno 540 GPU (indicating the presence of Snapdragon 835 SoC), 4GB of RAM and 64GB of inbuilt storage. Other features leaked of the Samsung Galaxy Tab S4 include a 12-megapixel rear camera, a 7-megapixel selfie camera. The tablet will reportedly run Android 8.0 Oreo. Connectivity options will include Wi-Fi, GPS, and Bluetooth.