Samsung Galaxy Note 9 is nearing launch with the August 9 unveiling in New York just a few days from now. The most recent development has revealed what is perhaps the official retail box of the upcoming Samsung flagship phablet. The retail box is said to have been spotted at a retail store in Russia, with the back revealing most major specifications of the Galaxy Note 9. Apart from that, the official pricing of the Samsung Galaxy Note 9 has been leaked. Just last week, the official launch video of the phablet was leaked that revealed design elements and capabilities of the S Pen.

Dmitriy Ryabinin, from Moscow, Russia, took to Twitter on Friday last week to reveal what seems like an alleged retail box of the Samsung Galaxy Note 9. Let's talk about what specifications have been revealed by the box itself. 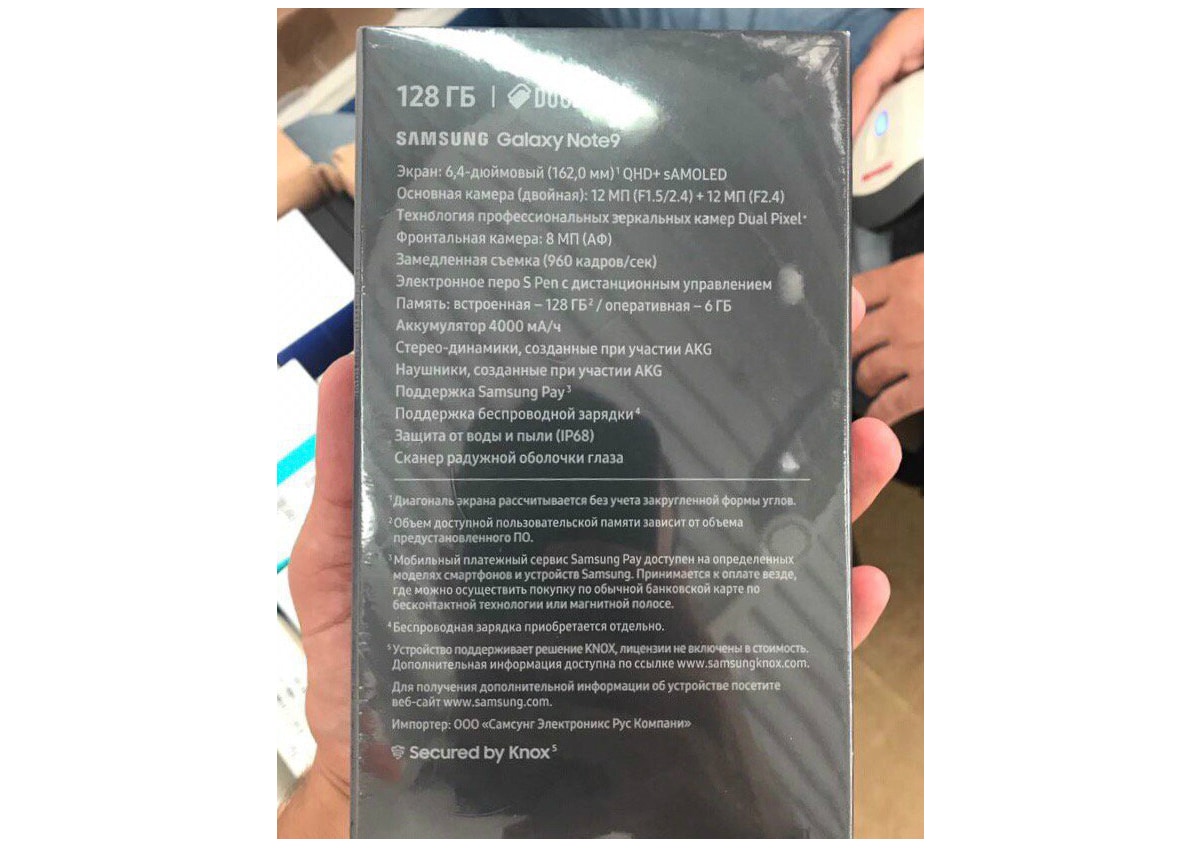 The leak reveals that the phablet will sport a 6.4-inch QHD+ sAMOLED display with a possible 19.5:9 aspect ratio, in sync with Samsung's 'Infinity Display' design. The dual rear camera setup on the smartphone is expected to bear two 12-megapixel sensors with a variable aperture of f/1.5-f/2.4 and slow-motion recording up to 960FPS. On the front, it will get an 8-megapixel selfie camera with autofocus.

While the SoC details have not been revealed in the leak, we could expect the Exynos 9810 to power the handset in countries like India, and the Qualcomm Snapdragon 845 SoC to power units in the US. The retail box is of the 128GB internal storage variant. There is a 4,000mAh battery under the hood.

Another interesting revelation from the retail box is that the S Pen, this time around, will come with Bluetooth support and could be used as a remote control for devices such as cameras.

Apart from the specifications, the Russian user on Twitter also revealed that the Samsung Galaxy Note 9 price in Russia will be RUB 69,990 (around Rs. 75,800) for the 128GB variant and RUB 89,990 (roughly Rs. 97,400) for the 512GB model. The smartphone will be made available in Black, Blue, and Copper colour variants.