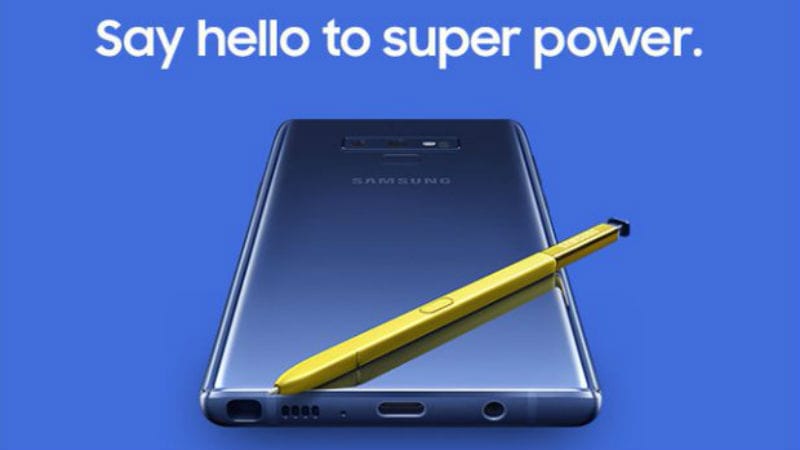 Samsung Galaxy Note 9 will get unveiled next week, but with all the rumours that have been surfacing on the Web, we probably know what to expect from the smartphone. Besides all the leaks, the Galaxy Note 9 has also been showcased in several teasers released by Samsung itself. However, the South Korean giant has now accidentally leaked the smartphone via its own site ahead of the launch. To recall, Samsung recently started offering reservations to be put down for the Galaxy Note 9 in the US. Notably, the flagship is expected to go on sale starting August 24.

The Galaxy Note 9 will be launched at Samsung's Galaxy Unpacked event on August 9, but countless leaks and rumours over the past few months have already hinted at most of the features of the upcoming phablet. Spotted by popular tipster Evan Blass, Samsung had published the full pre-order announcement for the Galaxy Note 9 on its New Zealand website. Alongside an image of the smartphone bottom of the smartphone and the S Pen were the words - 'Say hello to super power'. Samsung had even invited users to pre-order the Galaxy Note 9 teasing, "Now you can be one of the first to experience it." However, you cannot do that right now.

Unsurprisingly, since the Galaxy Note 9 will not be announced before August 9, Samsung has removed the pre-order page. While you will have to wait for the page to resurface again, Blass has also posted a screenshot that shows the contents of the page. The image provides a clear look at the Galaxy Note 9's rear-mounted fingerprint sensor, dual camera setup, 3.5mm headphone jack, USB Type-C port, and an upgraded S Pen stylus. The Galaxy Note 9 showcased by Samsung is a Blue colour variant, though the S Pen is Yellow.

As mentioned, in the US, you can reserve the Galaxy Note 9 to ensure a guaranteed delivery on August 24. Notably, it is just a reservation and not a pre-order for the Samsung Galaxy Note 9. Users do not have to pay for anything right now, as the process is just meant to ensure that they have a handset reserved for delivery on launch day. The reservation page does not reveal any of the pricing or availability details of the smartphone.

To recall what we know so far based on previous leaks, the Samsung Galaxy Note 9 could come with an upgraded display and an improved S Pen. A recent Geekbench listing highlighted that the handset will be powered by an Exynos 9820 SoC, though it was initially speculated to have the same Exynos 9810 SoC that debuted on the Galaxy S9 family earlier this year and its US version is likely to have the Snapdragon 845 SoC.

It is also rumoured that Samsung will offer a 512GB storage option this year to give plenty of space to the Galaxy Note 9 users. Further, the new Galaxy Note model could come in multiple colour options and new colour combination to attract users. It is also expected to have an upgraded dual rear camera setup and a larger battery than what was found on the Galaxy Note 8. Past rumours have also indicated that the Samsung Galaxy Note 9 will come with a 6.4-inch QHD+ Super AMOLED Infinity Display with an 18.5:9 aspect ratio. Samsung is also expected to offer an upgraded dual rear camera setup on the Galaxy Note 9 with a list of new features to optimise images and videos.