Samsung Galaxy Note 9 Leaked in Fresh Renders Ahead of Launch

Samsung Galaxy Note 9 is set to be unveiled at the company's Unpacked event on August 9, and ahead of that rumours suggest that the smartphone will come in a slew of colour options, a dual camera setup, and a rear fingerprint sensor. Samsung is also expected to launch a Deepsea Blue or Coral Blue colour variant, with a gold or yellow S Pen, and this has been repeated in many renders. Again, fresh renders have surfaced giving us more confirmation on colour options.

Tipster Evan Blass, aka @evleaks, has shared high quality renders of the Samsung Galaxy Note 9 in three colour variants - Blue, Black, and Brown. While the black and brown variants have matching coloured S Pens, the Blue variant has a yellow coloured S Pen in contrast. This corroborates with previous leaks that suggest the same. In fact, just a day ago, renders of the same colour options were leaked with bundled goodies. As part of the launch offer, Samsung may bundle a free Gear S3 smartwatch alongside the purchase of the Blue variant. The Black variant may come with a fast charging wireless charger, and the Brown variant may come with a free Gear IconX earbuds.

A separate photo has been shared on Slashleaks and it is claimed to show the Galaxy Note 9 from the front and back as well. The screen seems to be cracked, and this makes us question the durability of the device even before it has launched. The display does not see any change in design from last year, while the back sees a horizontal dual camera setup addition, with a fingerprint sensor that sits oddly close to the camera. Samsung is expected to launch an updated S Pen with Bluetooth capabilities, and a Samsung Wireless Charger Duo device that can charge a phone and a smartwatch simultaneously. 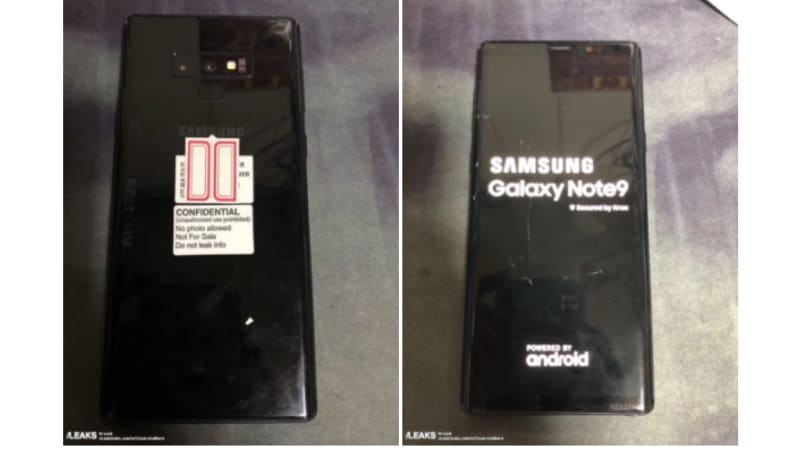 Samsung Galaxy Note 9 rumoured specifications include a 6.4-inch QHD+ Super AMOLED Infinity Display with an 18.5:9 aspect ratio. The smartphone might be powered by the upcoming in-house Exynos 9820 SoC, coupled with up to 8GB of RAM and up to 512GB of internal storage. There will most likely be a dual camera setup at the back, with primary and secondary sensor specification unknown.