While its official global launch is scheduled for August 9, Samsung Galaxy Note 9 has now been listed on Flipkart. The online marketplace has included all the three teaser videos that have so far been released by Samsung to tease some of the key features of the upcoming Galaxy Note model. Also, the listing of the Galaxy Note 9 hints at its arrival in India sometime after the global launch. We can safely presume that the India launch schedule of the handset could be in line with its debut in major worldwide markets. The South Korean company is additionally likely to retain its partnership with Flipkart for selling the Galaxy Note 9 online.

Flipkart has created a dedicated section, namely Galaxy Unpacked, that presently exists on its Android and iOS apps and its mobile website. The section doesn't reveal any price or availability details. However, as we mentioned, it includes three recent teasers of the Galaxy Note 9 to highlight a fast experience, long battery life, and plenty of storage. There is also an option to sign up using your name, email ID, and phone number to receive notifications on the arrival of the Galaxy Note 9. 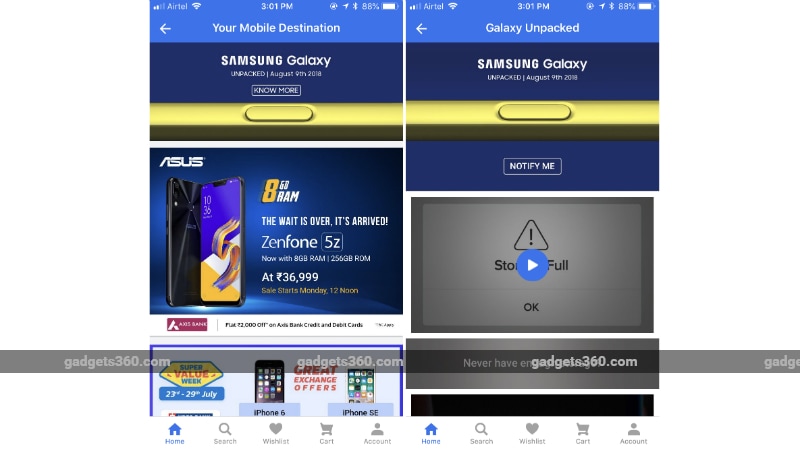 While the Flipkart listing doesn't reveal the price and availability of the Samsung Galaxy Note 9, some previous reports claimed that the new handset will go on sale in key global markets starting August 24 with a price tag of PLN 4,299 (roughly Rs. 79,500) for the 6GB RAM and 128GB storage variant. It is also reported that the pre-orders for the Galaxy Note 9 will be kicked off starting August 9, the day when Samsung will host its Galaxy Unpacked event in New York to launch the handset alongside unveiling the Galaxy Watch and some other goodies.

If we look at the past rumours, the Samsung Galaxy Note 9 is expected to come with a 6.4-inch QHD+ Super AMOLED Infinity Display with an 18.5:9 aspect ratio. The handset is likely to have up to 8GB of RAM and as much as 512GB of onboard storage. Samsung is also expected to offer an upgraded dual rear camera setup on the Galaxy Note 9 with a list of new features to optimise images and videos. Further, while the new Galaxy Note model was initially rumoured to include an Exynos 9810 SoC for global markets, an off late Geekbench listing highlighted that the handset will come with a new Exynos 9820 SoC. Its US variant is, however, so far rumoured to include a Snapdragon 845 SoC.

Being an upgrade to last year's Galaxy Note 8, the Samsung Galaxy Note 9 is expected to come with an upgraded S Pen that may come in a Gold colour option. The handset could also feature new colour variants, including a Deepsea Blue.

Further reading: Samsung, Flipkart
Jagmeet Singh Email Jagmeet Jagmeet Singh writes about consumer technology for Gadgets 360, out of New Delhi. Jagmeet is a senior reporter for Gadgets 360, and has frequently written about apps, computer security, Internet services, and telecom developments. Jagmeet is available on Twitter at @JagmeetS13 or Email at jagmeets@ndtv.com. Please send in your leads and tips. More
Tech Firms Should Be Made Liable for 'Fake News' on Sites: UK Lawmakers
Xiaomi Mi Router 4C With 4 Omni-Directional Antennas Launched

Samsung Galaxy Note 9 Gets Teased by Flipkart Ahead of August 9 Launch
Comment
Read in: हिंदी বাংলা