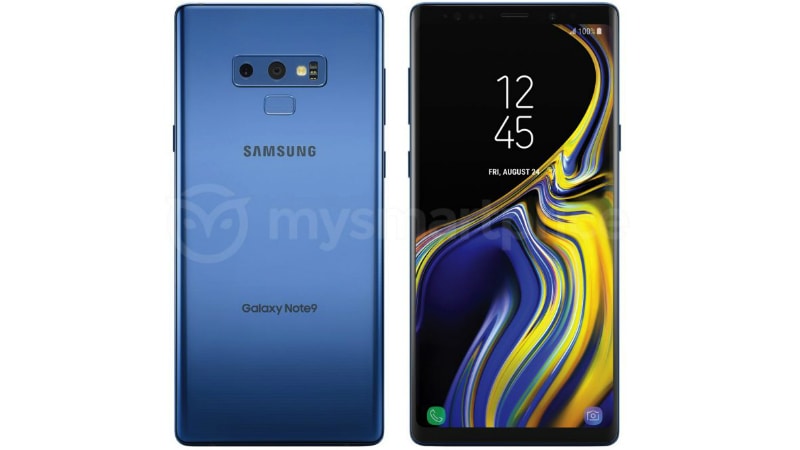 Samsung's Unpacked press conference is set to be held at Barclays Center on August 9, and ahead of the Galaxy Note 9 launch, leaks are increasing in pace. The big announcement of the Samsung Galaxy Note 9 is anticipated, and fresh leaks give us more information on a new colour variant. A leaked document also confirms that the Galaxy Note 9 will sport a 4000mAh battery, and posters leaked out of South Korea indicate that the company is already prepping for pre-orders. New features of the S Pen have been leaked as well, courtesy Galaxy Tab S4 firmware, and lastly a new wireless charger retail box has also been leaked that claims to have the ability to charge two Qi-enabled devices and a Galaxy Watch.

This render also shows that the front looks a lot like the Galaxy Note 8, and the only changes noticeable are at the back. We can see the horizontally stacked dual cameras along with the flash alongside, inside a rectangular ring. There is also a fingerprint sensor that sits below the sensors, but it is placed oddly close to the camera setup. This blue render corroborates with all leaked phone photos in the past.

A leaked document, shared by SlashLeaks, from the National Telecommunications Agency in Brazil indicates that the Galaxy Note 9 will sport a 4000mAh battery This smartphone will also presumably support fast charging - possibly Quick Charge 4.0 support. A new wireless charger box has also been leaked by tipster Roland Quandt, indicating that Samsung will also introduce a new wireless charging pad at the event. Called the Wireless Charger Duo, this new Samsung device is expected to charge two Qi-compatible smartphones, and one Galaxy Watch - another product that is expected to launch on August 9. You can see the packaging box in the picture below. More details on this product will be known at launch.

Coming to the S Pen, we already know that some big changes are incoming, probably to make up for the little upgrade, that the Note 9 is now seeming up to be. XDA Developers discovered new features of the S Pen through a teardown of the AirCommand app (version 3.0) from the leaked Samsung Galaxy Tab S4 firmware . These features are expected to come to the rumoured Samsung Galaxy Tab S4, and presumably the Note 9 as well. As we already know, the S Pen is expected to be Bluetooth-enabled, and this will bring new reported abilities like a remote camera shutter, be able to control music, remotely unlock the Galaxy Note 9 when the S Pen is out, expanded AirCommand integration, and other single click, and long press multi-functions that can be customised as per users' preference.

Samsung Galaxy Note 9 rumoured specifications include a 6.4-inch QHD+ Super AMOLED Infinity Display with an 18.5:9 aspect ratio. The smartphone might be powered by the upcoming in-house Exynos 9820 SoC, coupled with up to 8GB of RAM and up to 512GB of internal storage. There will most likely be a dual camera setup at the back, with primary and secondary sensor specification unknown.