Samsung last week started sending out invites for the launch of its Galaxy Note 8 smartphone at an Unpacked event on August 23. While the renders for the smartphone have become quite common over last few weeks, now we have got our peek at its S Pen as well. Leaked live images have now surfaced on the Internet and give us a close look at the stylus that will come along with the Galaxy Note 8. Separately, the smartphone has now been tipped to come in an all new Deep Blue colour variant as well.

The leaked images of the Samsung Galaxy Note 8's S Pen, shared by Slashleaks, show an up-close view of the stylus and it seems like much has not changed from the previous generation, at least on the surface. While Samsung can be expected to make improvements in terms of accuracy and other aspects but in terms of design, it has been tipped to retain its tried and tested formula. 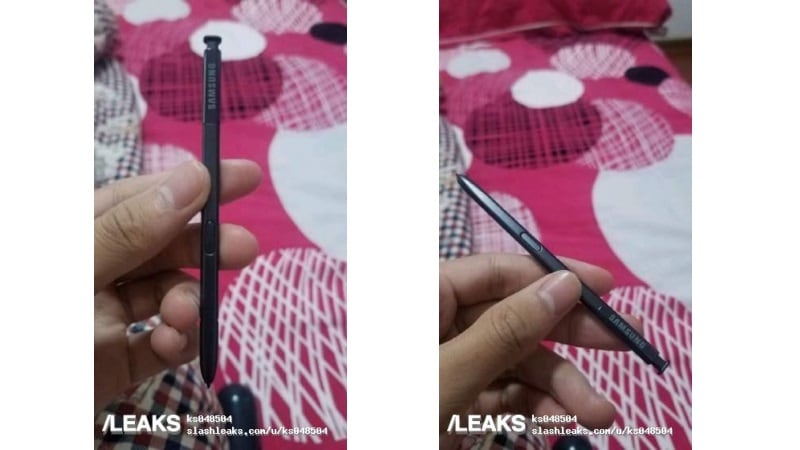 While the South Korean company appeared to have found the right balance between the design and usability with Galaxy Note 7, after having issues on Galaxy Note 5, last year's model was discontinued due to explosion cases caused by faulty batteries.

Moving on to the new colour variant, Galaxy Note 8 has been tipped to come in an all new Deep Blue colour variant by well-known tipster Roland Quandt. This colour option is expected to be presented alongside other options Orchid Grey and Midnight Black at the very least, according to the leak.

As the Samsung Galaxy Note 8 is all set to be unveiled next month, it is not long before we will get to see the handset and confirm whether these leaks are genuine or there is any twist in the tale. Stay tuned in to get regular updates ahead of the launch.