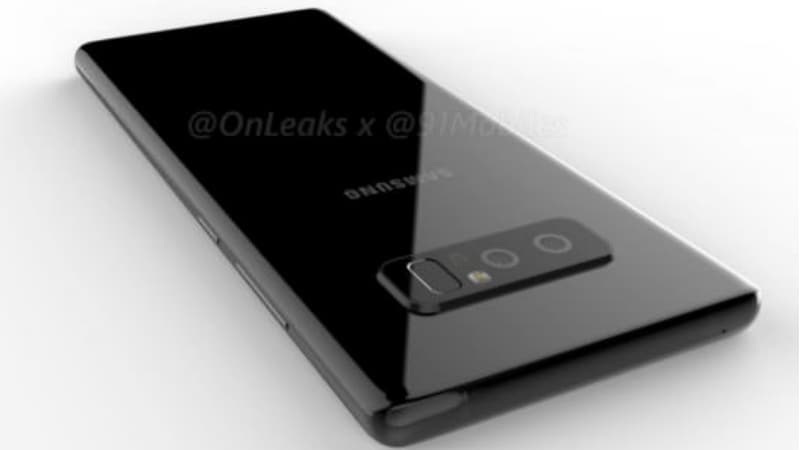 Samsung Galaxy Note 8 is one of the most anticipated smartphones of the year, and not necessarily for all the right reasons. After the debacle of last year’s Galaxy Note 7 recall, the successor has a lot to redeem. The smartphone has been leaked on several occasions in the past, and fresh leaks show us a full blown look at the Galaxy Note 8 from all angles.

OnLeaks in collaboration with 91Mobiles has published renders, a 360 degree CAD video, and some additional information about the Samsung Galaxy Note 8. According to the render, the most notable change is the horizontal dual camera setup at the back with the fingerprint scanner located right beside in the top centre at the back. If true, this would be the first dual camera smartphone from Samsung. The back is made from glass, and the bottom edge is seen sporting the USB Type-C port, the speaker grille, the S Pen slot, and the 3.5mm audio jack. The volume and Bixby keys are both situated at the left edge of the device, and the power key is sitting alone at the right edge.

The front sports an almost bezel-less display barring the top chin where all the sensors and earpiece are located. The edge screen is still intact, and the phone sports a Black colour variant, however the report says that the smartphone will launch in Blue and Gold colour variants as well. The phone is reportedly also expected to be slightly thicker than the predecessor with 162.4x74.5x8.4mm dimensions, while the the Note 7's measurements were 153.5x73.9x7.9mm. Perhaps this decision will not squeeze the battery as it had in the now infamous Samsung Galaxy Note 7.

The Samsung Galaxy Note 8 is said to feature a 6.3-inch display with 18.5:9 aspect ratio and support for 2K resolution. The dual camera setup on the Galaxy Note 8 is expected to sport two 12-megapixel sensors and come with independent OIS (optical image stabilisation) for each lens. The Samsung Galaxy Note 8 has been tipped to pack 6GB of RAM and be powered by Snapdragon 835 or Exynos 8895 SoC (depending on the market). It is expected to house a 3300mAh battery, which is notably less than the 3500mAh battery on Galaxy S8+. However, after the explosion cases that were caused due to battery last year, reducing battery capacity might not be the worst of ideas. The battery will support fast charging and wireless charging.

The Galaxy Note 8 is tipped to support split-screen multitasking, the ability to pin notes to the Always-On Display, and the DeX dock. As per a recent news report, the South Korean company might launch the smartphone in late September at a price tag of EUR 999 (roughly Rs. 72,100).