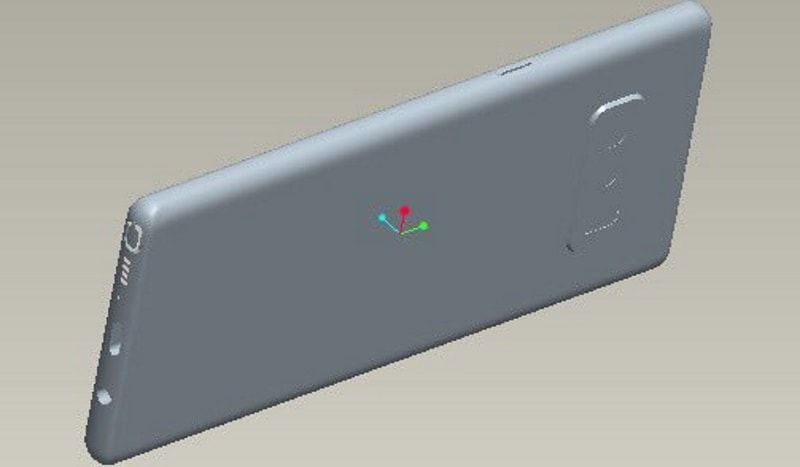 Samsung Galaxy Note 8 has been a big part of the rumour mill in the last few weeks, and now a new render of the smartphone has been leaked. Notably, the latest leak suggests some of the design elements that have already been tipped for the upcoming flagship from Samsung.

The latest render, leaked by Slickwraps CEO Jonathan Endicott, shows a CAD designed image of the upcoming Galaxy Note 8, as pointed out in a report by PhoneArena. For those unaware, Slickwraps is a smartphone skin maker and considering that the company usually needs a heads up before the official launch to start production of accessories, this might be the final design of the smartphone.

If you remember some of the leaks that came out ahead of the official launch of Galaxy S8 and Galaxy S8+, one of the first leaks that most accurately predicted the phones' design came from a company that manufactures plastic cases for smartphones. If history has any indication, this leaked render might be our clue to the final design language on the upcoming Samsung Galaxy Note 8.

Further, this new Galaxy Note 8 render resembles the render that was recently leaked and showed the horizontal dual camera setup on the back of the device.

The dual camera setup on the Galaxy Note 8 is expected to come with two 12-megapixel sensors and come with independent OIS (optical image stabilisation) for each lens. The dual cameras on the smartphone have been said to be in horizontal orientation.

The Samsung Galaxy Note 8 has been tipped to pack 6GB of RAM and be powered by Snapdragon 835 or Exynos 8895 SoC (depending on the market).

The Galaxy Note 8 is expected to house a 3300mAh battery, which is notably less than the 3500mAh battery on Galaxy S8+. However, after the explosion cases that were caused due to battery last year, reducing battery capacity might not be the worst of ideas. A recent report suggested that the smartphone will be launched in September this year.