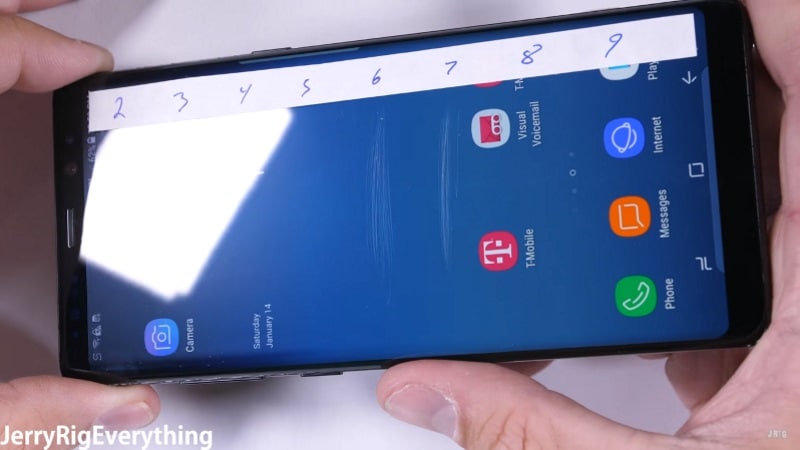 Now that Samsung will likely be launching Galaxy Note 8 smartphone in India on September 12, you might be wondering how the handset performs in terms of durability. Just like happens after every smartphone launch, the Samsung Galaxy Note 8 has been made to go through a durability test and as it turns out, the flagship handset from Samsung appears to hold itself up really well in extreme situations.

Popular YouTube channel JerryRigEverything's Zack has now tested the Galaxy Note 8. During his test, Zack found out that just like most other recent flagships, the Corning Gorilla Glass 5 covered display on the Galaxy Note 8 starts scratching at Moh level 6 hardness. Essentially, this means that the display should not be scratched easily in day-to-day usage in pockets that also have keys or coins in them.

The front camera lens as well as the back of the smartphone is also covered in Gorilla Glass 5 and thereby resistant to scratches. The frame of the dual camera setup is prone to scratches as it is made of metal but lens part is covered by glass and thereby less likely to scratch. However, the rear part with fingerprint sensor was easily scratched with a razor blade. Notably, despite being scratched, the fingerprint scanner was able to function properly.

The Galaxy Note 8's S Pen was also scratched easily in the test but still performed its functionality without a hiccup. Also, the stylus does not get stuck inside the smartphone if inserted from back side, something that should come as a relief after Galaxy Note 5. In the test against fire, the display lasted 10 seconds before it was impacted permanently, which is not bad.

Finally, the bend test, which often reveals the hardware quality of the smartphones, was found to leave no impact on the Galaxy Note 8. If you were on the edge regarding Galaxy Note 8 due to scepticism about its hardware, this durability should likely clear the doubts. Let us know if you are excited about the new Samsung flagship.

iVoomi Me 3, Me 3s With Shatterproof Display Launched in India: Price, Specifications
Google Feed With Hindi Support Rolls Out in India on Android and iOS