Samsung has been rumoured to unveil the next Galaxy Note earlier than usual to fend off iPhone competition this year, just as it did last year. Now, a fresh image leak further testifies to the rumour, and hints that the company may be holding an event as soon as August 2 to unveil the phablet in the market.

The leaked image was shared by Sammobile, and it shows details of a Galaxy Unpacked 2016 event on August 2 at the Lincoln Center in New York. It is scheduled to begin at 11am EDT (8.30pm IST). The image also further testifies that the next phablet will skip a numeral, and will be called the Galaxy Note 7. This numbering is presumably done to avoid confusion, and maintain uniformity with its flagship Galaxy S series. The image also hints at the possible comeback of an Edge variant alongside the Galaxy Note 7, or as is more likely, the launch of only an Dual-Edge display model like the Galaxy S7 Edge. 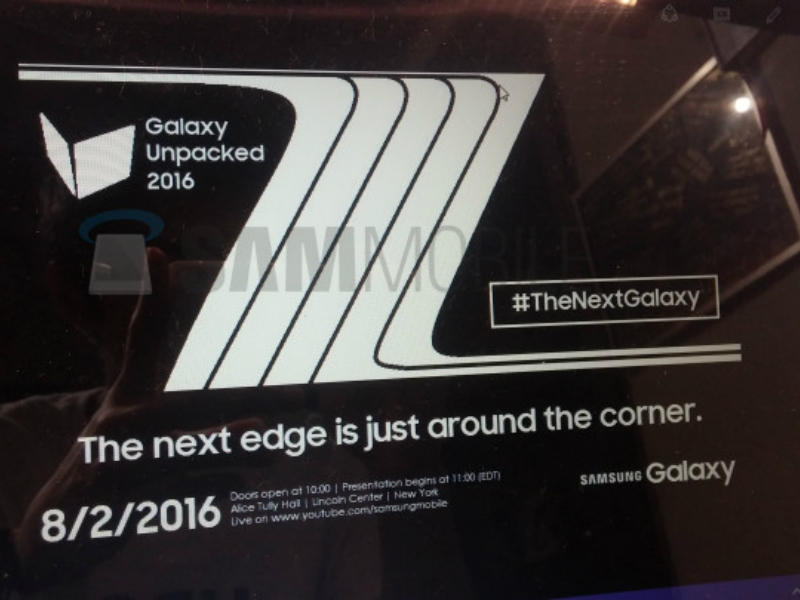 Samsung had left out the Edge variant with the Galaxy Note 5 last year due to S Pen technical issues.

Leaked specs indicate a 5.8-inch QHD display, a Snapdragon 820 or Snapdragon 823 SoC paired with 10nm 6GB of RAM module, 32GB inbuilt storage with expandability via microSD card, a 12-megapixel rear camera, and a Dual Pixel setup in the front. Additionally, the Galaxy Note 7 is expected to feature an iris scanner, a fingerprint sensor, and a USB Type-C port.