Just like every year, Samsung will unveil its next offering sometime in the second half of 2016. But before that, leaks have been in abundance, and the latest gives us more details on the dimensions, a switch to USB Type-C, and a possible addition of an iris scanner.

The latest leak comes from uSwitch in the form of a video that show a Galaxy Note 6 rendered from leaked blueprints from all angles. The video reveals dual-edged curves on the display, indicating it is the Galaxy Note 6 Edge variant. There's also the USB Type-C port at the bottom, hinting that Samsung has finally ditched Micro-USB and adopted USB Type-C. Upon looking carefully, there are two large and three small sensors on top of the display screen. This indicates the addition of the iris scanner into the Galaxy Note 6. If this is true, the user will be able to unlock the Galaxy Note 6 just by looking at it.

Additionally, another tipster Shai Mizrachi leaked a sketch of the Galaxy Note 6 revealing its dimensions. The phablet is expected to measure at 153x74.5x7.8mm. It again sports a dual-edged curved screen, again fuelling the rumours of an Edge variant. 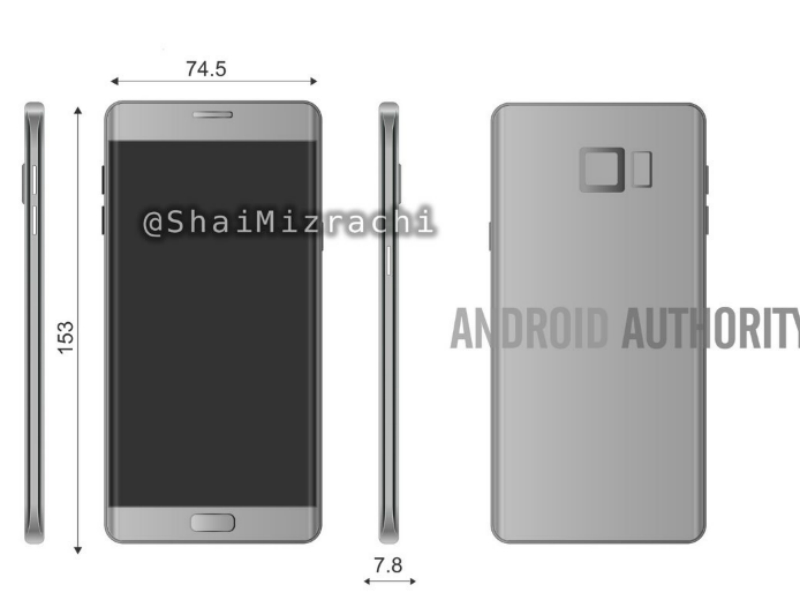 Samsung is also expected to ditch the 6 number, and jump to the next one calling the next Note - the Galaxy Note 7. However, reports are diverse, and we would want you to take all the information with a pinch of salt.

As previously reported, the Galaxy Note 6 is expected to be unveiled early in August to fend off iPhone competition. Leaked specifications so far include a 5.8-inch QHD display, a Snapdragon 820 SoC paired with 10nm 6GB of RAM module, 32GB inbuilt storage with expandability via microSD card, a 12-megapixel rear camera, and a Dual Pixel setup in the front.