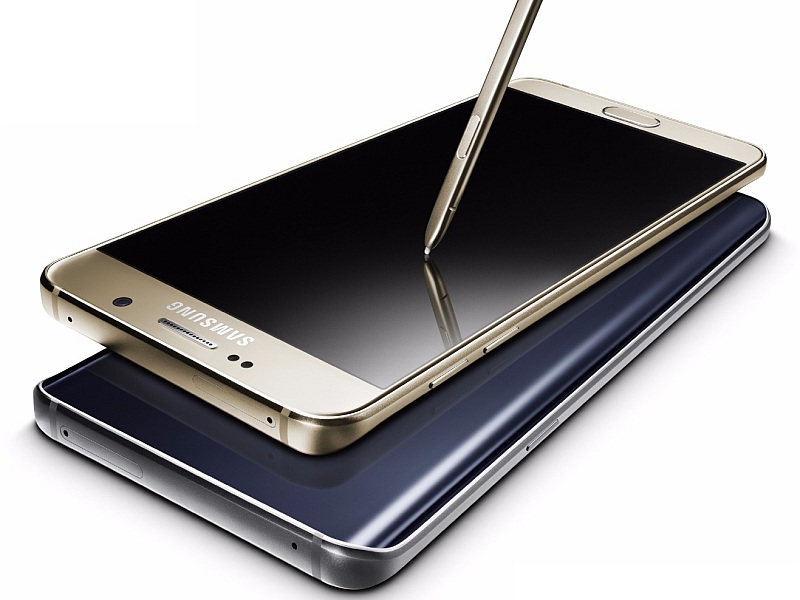 The Galaxy Note 5 features a 16-megapixel rear camera with f/1.9 aperture and optical image stabilisation, apart from a 5-megapixel front-facing camera. The camera app can be opened with a double press on the home button, which also bears the fingerprint sensor. A Live Broadcast feature is also being touted.

The Galaxy Note 5 comes with a 4G LTE Cat. 6 modem and support for India's 4G LTE bands. It features NFC and MST technology to power the Samsung Pay mobile payment service, but for now, no details of when the service will be launched in India has been revealed. Other connectivity options include Bluetooth 4.2, Wi-Fi 802.11 a/b/g/n/ac, GPS/ A-GPS, and Micro-USB 2.0.

The latest Note phablet features dimensions of 153.2x76.1x7.6mm, and a weight of 171 grams. It will be available in Black Sapphire, Gold Platinum, and Silver Titanium colour variants. Samsung will also be providing 100GB of OneDrive cloud storage for free. Those consumers that pre-book the smartphone will also get a free wireless charger, and a one-time screen replacement.

As for the S Pen, Samsung said the stylus now features a one-click mechanism to eject it from the main smartphone body. New and improved features include the ability to take notes without unlocking the phone, and an updated Air Command feature that shows a hovering icon for quick access to stylus tools. Scroll Capture offers annotation and screen/ text capturing abilities.
Advertisement