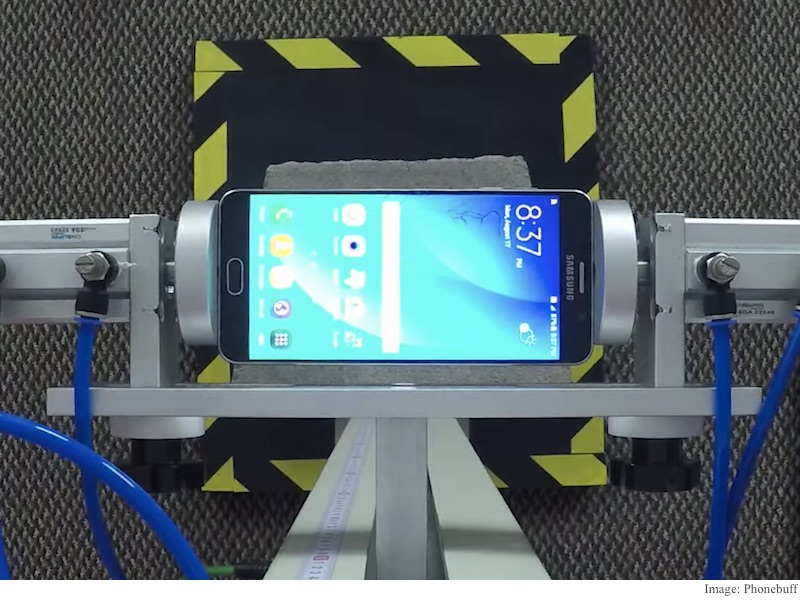 Samsung released the Galaxy Note 5, its flagship phablet for this year, at the Galaxy Unpacked 2015 event last week. The handset offers impressive hardware specifications while also sporting a stronger body with metal frames running along its edges. But how strong is the Galaxy Note 5? Not as strong as the iPhone 6, reportedly.

Folks over at PhoneBuff performed the drop test with Samsung's new rocker, and compared the result with other devices to determine how strong the Note 5 actually is. PhoneBuff said it uses a standard drop test machine, arguing that this gives its methodology and results more credibility. In its test, the Galaxy Note 5 managed to survive when dropped on its edge from 1 metre above the ground onto a tile. There were, of course, some minor scratches, but the metal frame largely kept the force from doing any noticeable damage to the device.

Unfortunately, the Galaxy Note 5 didn't offer similar robustness when dropped on its back or front panels. The same height cracked the glass layer on the back panel, with a spider web of crack all across the back panel except for above the camera module. Phone Buff notes that the cracks weren't on the top layer of glass, so the phone can continue to be used without users cutting their fingers.

Dropping the Galaxy Note 5 on its front panel shattered the glass of the display, but the touch input and display continued to work. Dropping the phone back-first on concrete however, saw touch input disappear from the bottom right corner, while face-first saw some more cracks appear. This gives you an idea of what to expect from the phone if it slipped from your pocket and fell to the ground.

PhoneBuff noted that according to its tests, the Galaxy Note 5 fared better than the Galaxy S6, one of the two flagship smartphones released by the South Korean technology conglomerate in March. But the Galaxy Note 5 couldn't surpass the Apple iPhone 6 or HTC One (M9), which as per PhoneBuff's benchmarking, are stronger devices.