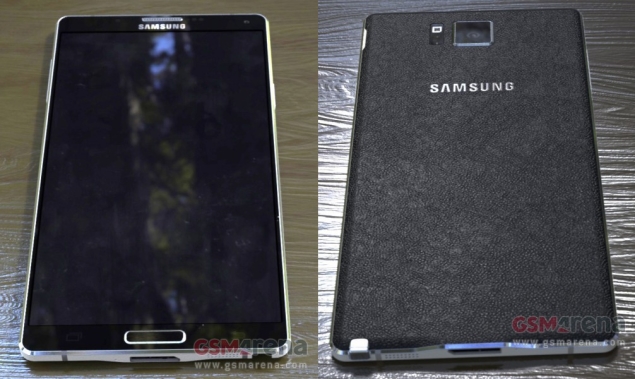 While Samsung is getting ready to launch its next generation flagship phablet on September 3, the unannounced Galaxy Note 4 handset and its alleged retail box have already made an appearance in purported live images.

The sides of the alleged Galaxy Note 4 seem a little different from its predecessor, and similar to the rumoured Samsung Galaxy Alpha smartphone which has been reportedly seen to sport a metal chassis, and is expected to launch this Wednesday.

The unannounced Galaxy Note 4's alleged retail box was spotted by Phonearena, and the box with a brushed metal design features an image of the Galaxy Note 4's front panel with the display on. Notably, the display has the date 'Tuesday, September 15' written on the lock screen. This ties-in exactly with the previously rumoured retail availability of the smartphone, after a pre-IFA 2014 launch on September 3.

Phonearena also suggests the brushed metal design of the box implies the use of new materials for the phone, which once ties-in with a statement made by Samsung's Head of Investor Relations, Robert Yi, during the conference call for the company's disappointing second quarter earnings, expressing the hope the Galaxy Note 4 and another smartphone with new design and materials will be able to turn things around.

The back of the alleged Galaxy Note 4 smartphone in posted the other leaked images appears to feature the faux-leather finish first popularised by the Note 3 last year. The back of the smartphone also visibly features the heart-rate sensor alongside the camera, first seen with the Samsung Galaxy S5. The S Pen holder appears to be located at the bottom-right edge corner, with an alleged Micro-USB 3.0 port and speaker grill.

The South-Korean giant has already sent out invites for its Unpacked 2014 Episode 2 event on September 3 in Berlin, ahead of IFA 2014. Apart from the Galaxy Note 4, Samsung is also expected to launch a new wearable device called Galaxy Solo or Gear 2 Solo at the same event.
Affiliate links may be automatically generated - see our ethics statement for details.
Comments