The new colour variant of the Galaxy Note 3 is listed on Flipkart. As of now, there is no word on the availability of the Pink colour model, with the page providing a 'Notify Me' option for consumers. 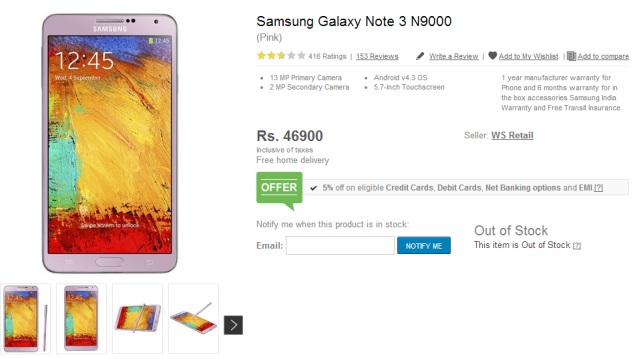 In addition, Sammobile in a report claims that Samsung would launch the Galaxy Note 3 in Red and White Gold colour variants in early 2014. The report speculates that the Red Galaxy Note 3 variant could be launched in the first week of January 2014, while the White Gold variant would follow two weeks later.

The Galaxy Note 3 runs Android 4.3 Jelly Bean with TouchWiz UI on top. It is powered by 1.9GHz octa-core processor and a 3GB of RAM. The phablet sports a 13-megapixel rear camera alongside 2-megapixel front camera. It is backed by a 3,200mAh battery.

The Galaxy Note 3 will be available in 32GB variants, with the company doing away with the 16GB variant after the controversy on the user available storage the Samsung Galaxy S4. It also supports up to 64GB of additional external storage.