Samsung’s waterfall display solution has holes drilled on the sides. 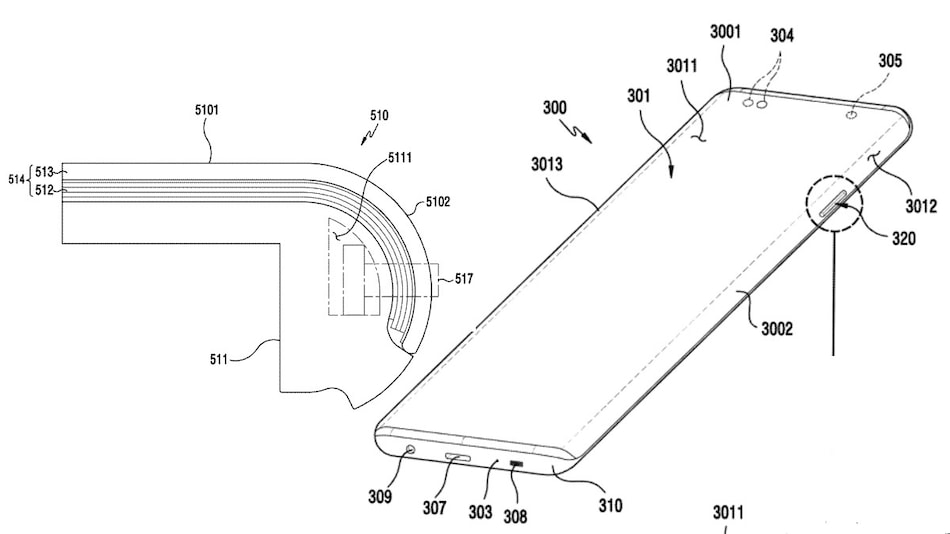 Samsung was granted the patent by USPTO earlier this month

Samsung is experimenting with the idea of a waterfall screen on phones, if a new patent filed by the company is anything to go by. And the most likely candidate to flaunt such a panel, as per reports, is the upcoming Galaxy Note 20 flagship. Samsung's patent filed before the United States Patent and Trademark Office (USPTO) reveals the schematics of a phone that features a waterfall display, akin to what we've seen on the Vivo Nex 3 and the Huawei Mate 30 Pro. But unlike the latter two phones which miss out on physical side buttons, Samsung's implementation has buttons poking through the curved glass.

The patent in question was filed back in February last year and was granted earlier this month. Titled “Electronic Device Including Bent Display and Method of Displaying Image on Bent Display”, Samsung's patent application says that curved display will offer a unique experience and will also enhance the aesthetics. The front panel is curved on both sides and covers almost the entire edge.

But rather than relying on capacitive controls to substitute the physical volume and power buttons, Samsung has actually drilled a hole in the glass on the curved sides. The power button pokes outside and is surrounded almost entirely by screen real estate. A similar layout can be seen on the left edge as well, where two discrete volume buttons are positioned.

Samsung's patent application does not mention on what device the aforementioned design will be implemented, and when it will hit the shelves. However, multiple reports suggest that the Galaxy Note 20 will feature this futuristic design. But Samsung appears to have an edge here. Capacitive touch input for volume controls have not been really well received, but adding a physical button without compromising on the aesthetic appeal of a waterfall display certainly sounds like a winning formula.