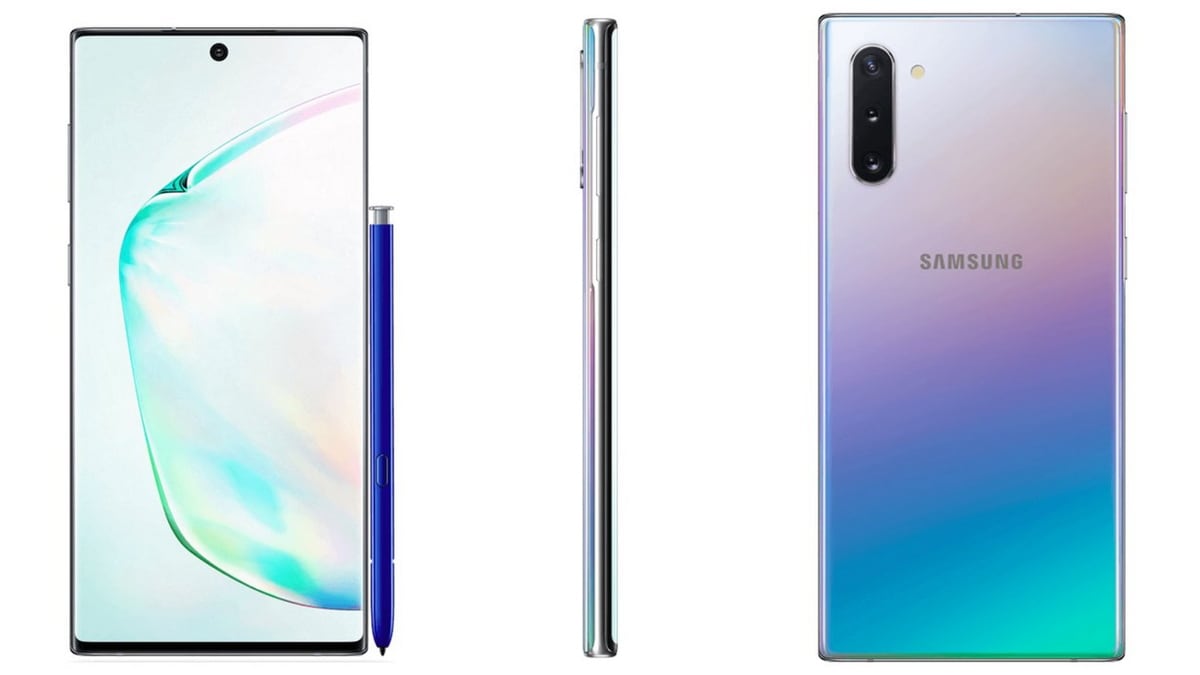 The Galaxy Note 10 duo will reportedly miss out on the 3.5mm headphone jack

The first look at the Samsung Galaxy Note 10 via alleged official renders comes courtesy of tipster Ishan Agarwal. The leaked images show the Galaxy Note 10 sporting a centrally positioned hole-punch camera and very thin bezels all around the edges. The display is curved on both the sides, but a major surprise here is the lack of a dedicated Bixby button.

The absence of a physical fingerprint sensor makes it almost certain that the Galaxy Note 10 will come equipped with an in-display fingerprint sensor, just like the Galaxy S10. The silver variant of the phone, which sports a brilliant gradient finish, is shown alongside a blue S Pen. The more understated black model is seen flaunting a glossy black finish, and it will reportedly be accompanied by a stylus of the same colour.

Samsung Galaxy Note 10+ is tipped to feature an additional 3D ToF sensor at the back
Photo Credit: Twitter / Ishan Agarwal

On the back, the vertically aligned triple rear cameras can be seen, which is again, a departure from the centrally-positioned horizontal camera lineup on its predecessor. The design of the Galaxy Note 10 shown in the renders is quite similar to what we have already seen via concept renders and case leaks.

A few additional colour options of the Galaxy Note 10 duo are tipped to be in the pipeline, but there is no word on what they will be called or how they might look. The standard Galaxy Note 10 is tipped to pack a 6.3-inch display, while the Galaxy Note 10+ will reportedly come equipped with a larger 6.7-inch panel, with both of them being Super AMOLED screens with HDR 10+ support and QHD+ resolution.

A report from SamMobile states that the 5G-ready version of the upcoming flagship, dubbed the Galaxy Note 10 5G, will offer up to 1TB of internal storage. The 5G variant of the Galaxy Note 10 will reportedly be available in a total of three storage options– 256GB, 512GB, and 1TB. The top-end model with 1TB of internal storage is tipped to pack a hefty 12GB of RAM and might sport a more premium ceramic finish on the back.