Samsung Galaxy Note 10 series launch event will begin at 12pm (noon) IST, and will be held at Samsung Opera House in Bengaluru.

Samsung Galaxy Note 10 and Galaxy Note 10+ are all set to launch in India today. The phones have been up for pre-orders in the country for a while now, and an official launch event is being hosted before the sale begins on August 23. Samsung has already revealed the Galaxy Note 10 and Galaxy Note 10+ price in India, variants, colour options, and the availability details for the Indian market. Pre-order offers include Rs. 6,000 cashback to HDFC credit card users and more. The India launch event will begin at 12pm (noon) IST, and it will be held at the Samsung Opera House in Bengaluru.

Samsung Galaxy Note 10 series India launch event will begin at 12pm (noon) IST at Samsung Opera House, Bengaluru. The event will be livestreamed on the official English and Hindi news websites of the company. The two phones are already up for pre-orders via select retail outlets as well as online retailers like Amazon, Flipkart, Paytm Mall, Samsung Online Store, and Tata Cliq.

As part of the pre-booking offers, the consumers can buy the Galaxy Buds at Rs. 4,999 instead of their regular price of Rs. 9,999. Alternatively, the buyers will also be eligible to buy the Samsung Galaxy Watch Active at Rs. 9,999, down from its existing retail price of Rs. 19,990. Other pre-booking offers include cashback of Rs. 6,000 when using HDFC Bank credit cards at retail outlets and Samsung Online Store. Same cashback is available by using ICICI Bank credit or debit cards at Amazon, Flipkart, Paytm Mall, and Tata Cliq. There's also no-cost EMI options, and 10 percent additional exchange bonus via Cashify.

The dual-SIM (Nano) Samsung Galaxy Note 10 runs Android 9.0 Pie with the company's One UI on top. It comes with 8GB of RAM and 256GB of inbuilt storage that isn't expandable. It packs a 6.3-inch full-HD+ (1080x2280 pixels) Infinity-O Display with a Dynamic AMOLED panel. The phone is powered by octa-core Exynos 9825.

There is a triple rear camera setup on the Galaxy Note 10, with a 12-megapixel primary sensor that is joined by wide-angle (77 degrees) lens with a variable aperture (f/1.5-f/2.4) as well as optical image stabilisation (OIS). The setup also features a 16-megapixel sensor with an ultra-wide angle (123 degrees) lens and an f/2.2 aperture. Finally, the phone houses a 12-megapixel sensor with a f/2.1 telephoto lens (45 degrees) and OIS. 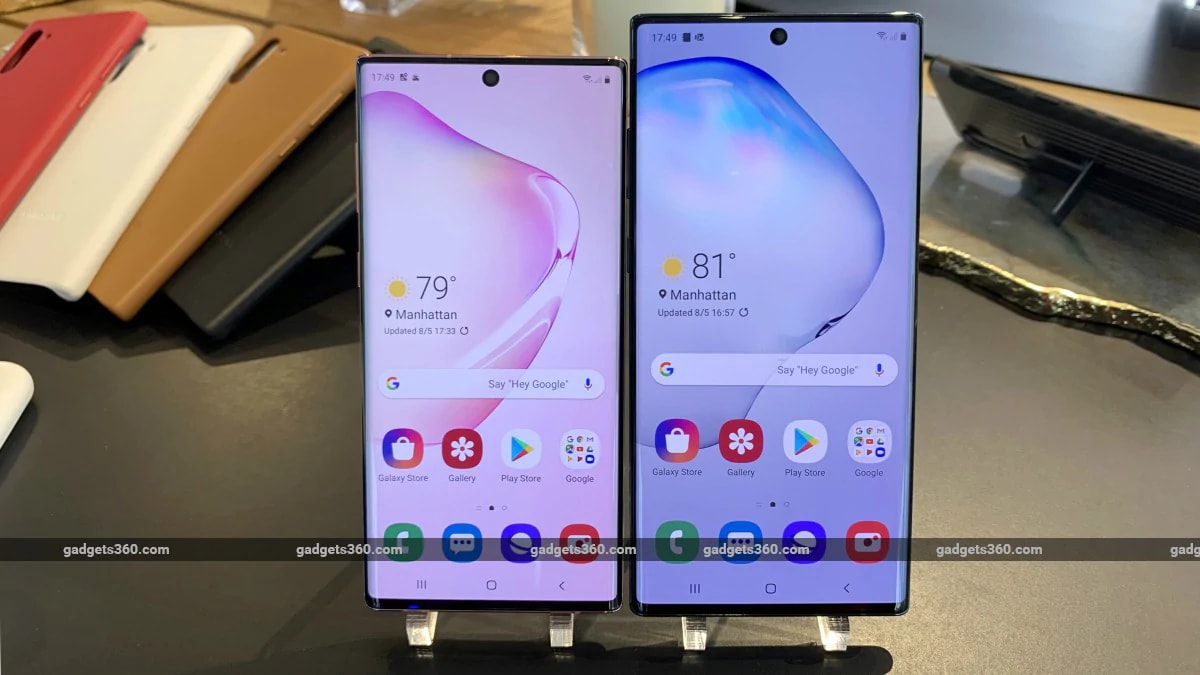 The Samsung Galaxy Note 10 has an accelerometer, ambient light sensor, barometer, gyroscope, magnetometer, proximity sensor, RBG light sensor, and an ultrasonic in-display fingerprint sensor on board. It runs on a 3,500mAh battery, and ships with a 25W charger in the box. It measures 151x71.8x7.9mm and weighs 168 grams. The all-new S Pen features a 6-axis sensor with a gyroscope and acceleration sensor.

In terms of cameras, the Galaxy Note 10+ has nearly the same setup as Galaxy Note 10 - with the added DepthVision Camera. It features a larger 4,300mAh battery, and supports up to 45W fast charging. It measures 162.3x77.2x7.9mm and weighs 196 grams. Other specifications of the phone are same as the Galaxy Note 10.