The two flagships will bring live bokeh video capture to the table. 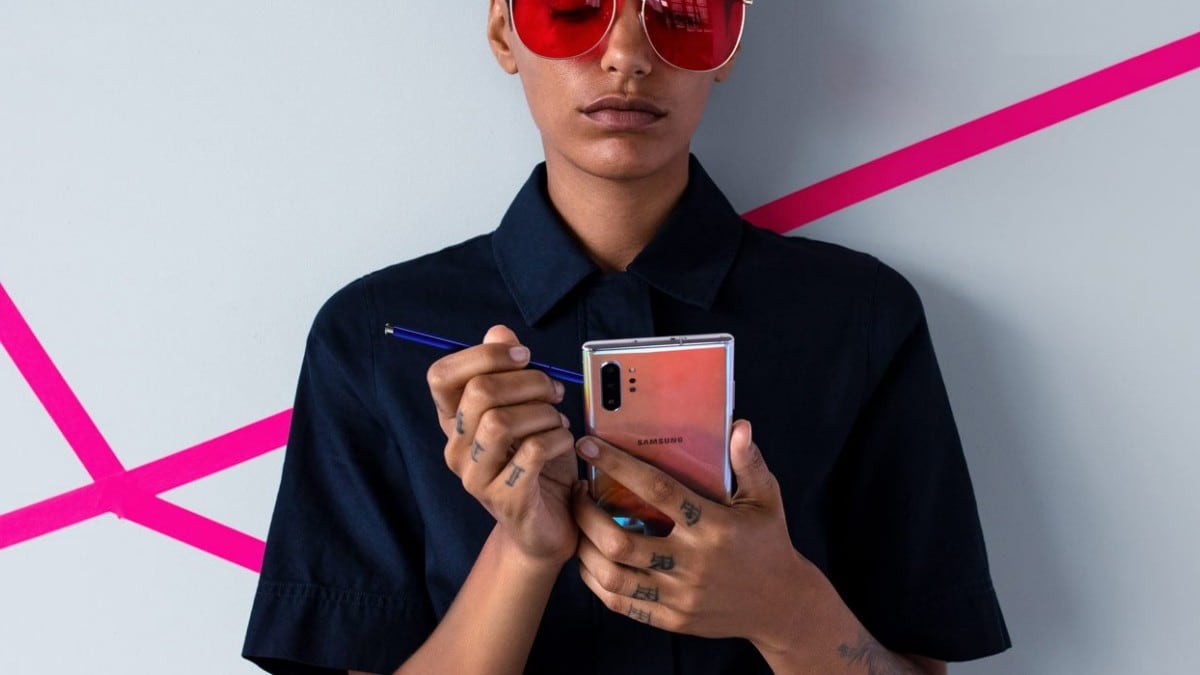 Samsung Galaxy Note 10 and its larger sibling are set to go official at the Galaxy Unpacked event later today, but leaks keep surfacing even in the final hours leading up to the launch. A marketing poster of the Galaxy Note 10 duo has popped up online, highlighting the size difference between the two phones, alongside a host of other promotional images that show the phone itself and talk about some of its capabilities. Moreover, details about the Samsung Galaxy Note 10+ and Galaxy Note 10's storage variants and colour options that will be available in the Indian market have also been leaked.

Another image allegedly shows the Aura Glow variant of the Galaxy Note 10+, which was leaked last month. A bunch of other high-resolution images show the phone from different angles as well as the S Pen, which is shown in blue, black, and white colour options.

Additionally, tipster Sudhanshu Ambhore has tweeted an image of what he claims to be the logistics box packaging of the Galaxy Note 10+ 5G that will carry the model number SM-N976. The phone will reportedly pack 256GB of storage, although variants with higher storage capacity have been tipped in the past, and will reportedly be available in Aura Black, Aura Glow, and Aura White colour options. The latter colour variant surfaced online earlier this month.

But that's not it. Alleged marketing material for the Galaxy Note 10 duo, the kind that can usually be seen on the product page of Samsung's official website, has also leaked online courtesy of Droid Life. The leaked slides claim that the Galaxy Note 10 will be a computer, a gaming console, and a film studio, all bundled into a single package that will be accompanied by the S Pen.

The images also show off the impressively thin bezels on the Galaxy Note 10 and the centrally-positioned hole punch that houses the selfie snapper. Fast charging support, intelligent battery optimisation algorithms, and an upgraded S Pen with support for aerial gestures are also teased in the leaked images.

A couple of weeks ago, another leak also mentioned an updated S Pen that will allow users to navigate through the phone's UI without having to touch the screen. But the freshly leaked promotional slides suggest that the new S Pen will let users click photos and will also allow them to use it for clipping, editing, and handwriting-to-text conversion. Moreover, the audio zoom that we heard about in another report, has been detailed by the leaked images.

The updated S Pen will let double as a shutter button and will support Air Gestures
Photo Credit: Droid Life

Moreover, details about the upcoming Note flagship's Indian availability have also been leaked. MySmartPrice cites tipster Ishan Agarwal to report that the Galaxy Note 10's 256GB variant will be up for grabs in Aura Black, Aura Red, and Aura Glow variant in India, while the 512GB variant will only be available in Aura White colour option.

The Galaxy Note 10+ will be sold in Aura Glow and Aura Black colours for the 512GB storage configuration. The phone's 1TB storage variant won't make it to the Indian market, as per Agarwal. Samsung, on the other hand, has lifted the covers from the Exynos 9825 processor that is expected to power the Galaxy Note 10 series phones.